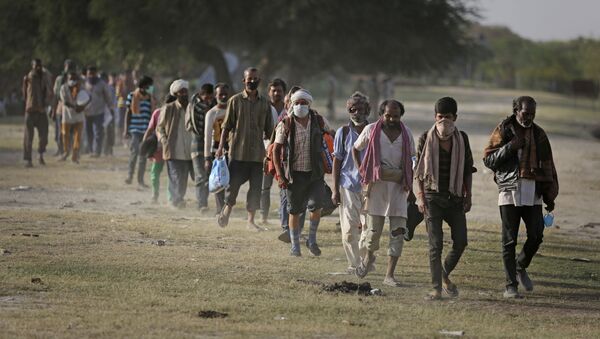 Radhika Parashar
All materialsWrite to the author
During the early days of the pandemic-induced lockdown, millions of migrant workers around India found themselves stuck far from their home states without concrete work. At the time, state governments came up with different ways to help these stranded workers in terms of housing and financing.

The Chief Minister Secretariat, the Disaster Management Department, and the National Informatics Centre (NIC) from the state of Bihar have collectively been chosen as the winners in the "pandemic category" of the 2020 Digital India Awards.

All Things Digital: From Increasing E-Payments to Mobile-Based Censuses, India is Quite ‘Online’
Through the state's own digi-financing app called "Bihar Sahayata Mobile App", more than two million workers from the eastern Indian state stranded in other parts of the country were provided financial assistance.

The app helped the Bihar government's initiative to facilitate direct financial transfers to the accounts of beneficiaries – setting a benchmark in executing innovative e-governance techniques.

Caught between joblessness and hunger, tens of thousands of Indian migrant labourers were making their way home from their workplaces earlier this year amid a prolonged lockdown introduced to contain the spread of COVID-19. Dozens lost their lives on the roads.

​Despite directives by the federal government to states to organise transportation for migrant workers, the arrangements were insufficient for the huge numbers of people seeking to return to their homes.

Indian President Ram Nath Kovind will be giving away this year's Digital India Awards to the respective winners on 30 December.

India adopted its first digital payment methods back in 2016 when Prime Minister Narendra Modi demonetised some major currency notes to tackle corruption in the country.

Earlier this month, Microsoft co-founder Bill Gates also lauded India for implementing digital financing services at such a mass level. Gates said that India's approach to digital financing is a model for other countries.