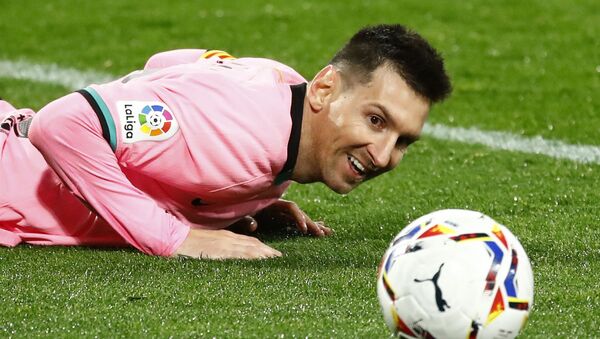 Asya Geydarova
Editor
All materialsWrite to the author
The Argentinian football star broke Pele's all-time record this week, after scoring his 644th goal for Barcelona in the match against Real Valladolid on Wednesday.

FC Barcelona captain Lionel Messi has shared the names of the best coaches he's ever worked with in his football career.

In an interview with Producciones del Barrio, Messi confessed Pep Guardiola and Luis Enrique are his two favourite mentors, adding that he has been lucky to work with both of them. According to Barça's captain, Guardiola has something "special" about him, making you "see things in one way". "He told you exactly how the match was going to be, how you had to attack to win", Messi said.

"I was lucky, in quotation marks, to train under Guardiola and Luis Enrique, the two best. Having them made me grow a lot physically and mentally, and also the tactical wisdom they've taught me", Messi was quoted as saying.

Messi, 33, also commented on his possible transfer, saying "I'm fine today. It's true that I had a very bad time in the summer".

Earlier this year, the Argentinian football star told media he wanted to break away from Barcelona after suffering losses in the Champions League. The fact that Messi's contract with the club expires in 2021, in addition to friction with the ex-president, Josep Maria Bartomeu, has prompted speculation that he might eventually file for a transfer.