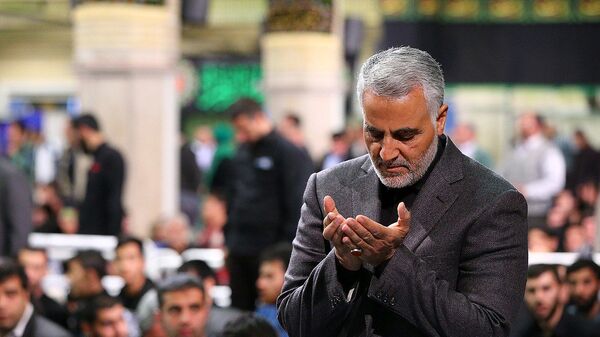 "Those are only slaps, while harsh revenge will be taken", Hejazi told reporters on Friday, referring to the major funeral for Soleimani and Iran's retaliatory missile attacks on US military bases in Iraq earlier this year.

He also made it clear the next slap may pertain to the expulsion of American forces from the Middle East, in an apparent nod to previous statements by Iranian Supreme Leader Ayatollah Ali Khamenei.

The warning comes a few days after General Kenneth "Frank" McKenzie, head of US Central Command, said in an interview with ABC News that American troops and diplomatic staff in Iraq face an increasing risk of attack from Iran or "Iranian-backed" groups as the one-year anniversary of Soleimani's death approaches.

The general added he believed Iran was also not seeking to escalate matters, and that the Islamic Republic "doesn't want a war with the United States right now".

He spoke as relations between Washington and Tehran took a turn for the worse this week after the guided-missile submarine USS Georgia entered the Persian Gulf through the Strait of Hormuz, in what was America's latest deterrence mission against Iran. The US Navy confirmed the submarine was accompanied by two American warships.

This followed Iranian Supreme Leader Ayatollah Ali Khamenei tweeting earlier this month that "those who ordered the murder of Soleimani as well as those who carried it out should be punished". According to Khamenei, revenge "will certainly happen at the right time".

His statement echoed that of Iranian Foreign Minister Mohammad Javad Zarif, who underscored in September that "the book" on the possibility of retaliating for the US assassination of the Iranian general is "not closed".

On 3 January, Soleimani, who was the head of the Iranian Islamic Revolutionary Guard Corps' elite Quds Force, and a senior Iraqi militia commander, Abu Mahdi al-Muhandis, were killed in a US drone strike on their car at Baghdad International Airport authorised by President Donald Trump.

Photos: Iran’s Fake Aircraft Carrier Repaired, Ready for Target Practice as US Tensions Simmer
The strikes did not result in deaths or serious injuries, but the Pentagon has since reported that at least 109 US servicemen have been diagnosed with traumatic brain injuries.

The developments took place against the backdrop of simmering Tehran-Washington tensions that have been in place since 8 May 2018, when Trump announced Washington's unilateral withdrawal from the 2015 Iran nuclear deal, also known as the Joint Comprehensive Plan of Action (JCPOA), and reinstated crippling economic sanctions against Tehran.