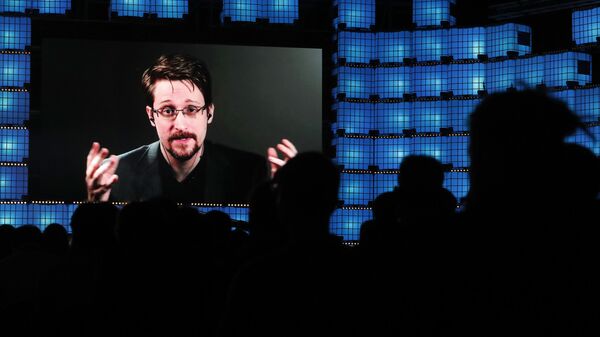 © AP Photo / Armando Franca
Subscribe
Kirill Kurevlev
Correspondent
All materialsWrite to the author
During what is apparently Trump's last days in office, the US president has issued a series of pardons, including his former campaign consultants Roger Stone and Paul Manafort, prompting hopes that he could also grant clemency to the former NSA contractor.

According to the report, US senator Rand Paul and Rep. Matt Gaetz have recently aligned in pushing Trump to issue a pardon that would drop the criminal charges and end the prosecution of Snowden, who's been in exile in Russia since 2013. Trump's former advisor Roger Stone, who was recently granted clemency by the president, has also joined them in the request.

As the outlet suggests, Trump's allies see him now as more compliant, since he needs their support in opposing Congress' final certification of Joe Biden's victory in the 2020 election.

Republicans reportedly say that Snowden was prosecuted unfairly for revealing that the NSA, in particular James Clapper, its director, was collecting the telephone records of a huge number of the country's citizens.

"He revealed that James Clapper, the highest-ranking, most powerful spy in the world, was spying on Americans and lied to us about it,” Politico quotes Rand as saying. "So I think what Snowden did was a service to the American people and he ought to be pardoned."

In his column for the Federalist earlier this month, Rand argued that Snowden should not be considered a traitor to the US, since he just tried to "expose this type of anti-American behavior from the Deep State", referring to Clapper lying under oath about collecting Americans' data in Congress. Rand believes that Joe Biden is likely to continue the "wrongful prosecution", which was initiated by ex-president Barack Obama.

"But Snowden is no traitor. He is a true whistleblower who was trying to expose those like Clapper who used Deep State powers in secret to go after Americans. Snowden should be pardoned. And this president, who distinguished himself as an opponent of the Deep State on issues of war and spying on Americans, should be the one to do it", he wrote.

According to the report, however, many of Rand's fellow Republicans oppose the pardon. Among them are Senator Lindsey Graham, the Chair of the Senate Judiciary Committee, and former House speaker Newt Gingrich.

"Snowden did enormous damage to the United States and I can’t imagine any reason for pardoning him", Gingrich said.

In an interview with the New York Post in August, President Trump recalled asking his aides whether he should consider granting clemency to Snowden, supposedly indicating that was open to the idea.

“There are a lot of people that think that he is not being treated fairly. I mean, I hear that”, Trump said.

Media reports suggest that the outgoing president may give preemptive pardons to approximately 20 close associates and his family members, including his personal lawyer Rudy Giuliani, and his children, Donald Trump Jr., Eric Trump and Ivanka Trump. The US Constitution gives the president the power "to grant reprieves and pardons for offenses against the United States, except in cases of impeachment". In fact, none of the aforementioned Trump associates have been charged with any crime.

Snowden, now 37, has resided in Russia since 2013. The US government revoked his passport while he was transiting through Moscow while going to another country, and Russia subsequently granted Snowden political asylum.

Back home, Snowden faces charges of espionage and theft of government property for revealing classified NSA information, including the details of secret programs that spied on US citizens' internet activity and telephone records.

In December this year, Snowden announced that he and his wife would apply for dual US-Russia citizenship.