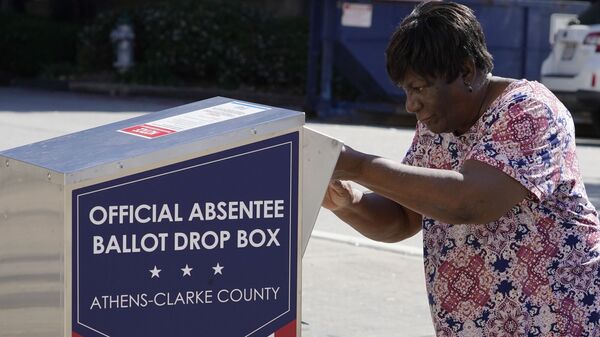 Tim Korso
All materials
The lawsuit was supposed to ease GOP fears that local authorities would once again change the rules of voting just weeks before the election, which is to determine which party will control the Senate for the next two years.

The Superior Court in Georgia's Fulton County has rejected a lawsuit seeking to force the county to prevent absentee ballots from being dropped off at drop boxes after regular business hours, which usually end at 5 p.m. The court judge Kimberly Esmond Adams declined to review the suit on the grounds of not having the necessary jurisdiction in regards to the case due to sovereign immunity laws.

The lawsuit was filed jointly by the local chapter of the GOP and the Republican National Committee. The attorney for the Georgia GOP explained that the case was not about limiting voters' rights, but about preventing the discrepancies that took place across the country during the presidential election, according to the Republicans.

"This case is absolutely not about the expansion or dilution of voter rights. ... This case and this motion is about ensuring that individual counties, 159 within the state of Georgia, do not themselves alter the election rules", the GOP attorney said in an interview with the Atlanta Journal-Constitution.

Had the case been reviewed, it would have affected the upcoming Georgia run-off election for the two Senate seats, which is to take place on 5 January. The voting will essentially determine which party will control the Senate for the next two years. In case the Democrats win, they will have full control of the Congress in the first years of Joe Biden's presidency.

The GOP's complaint about possible last-minute changes to the voting rules comes after Republicans blamed Democrat-led states for changing the rules in regards to mail-in and absentee ballots voting just months prior to the presidential election. President Donald Trump argued that millions of ballots were sent to voters who never requested them and claimed that they were used in mass voter fraud, which ultimately resulted in the election being "stolen" from him. Democrats deny his claims and insist that the mail-in voting was nothing out of the ordinary and was not as susceptible to manipulation as Trump alleges.