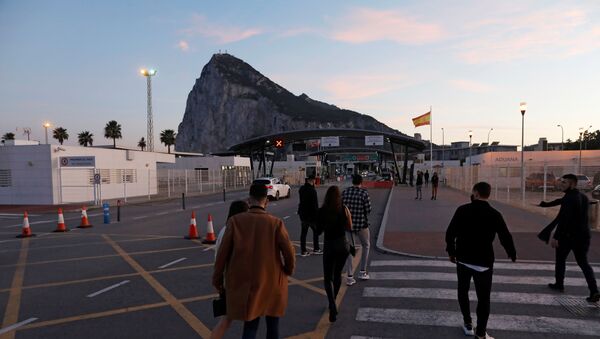 Kirill Kurevlev
Correspondent
All materialsWrite to the author
The UK and the EU reached a post-Brexit trade deal on Thursday, after long exhausting rounds of talks, just a week before the transition period is supposed to end. The deal has come as a relief to many, but still left some concerns for Gibraltar, a British overseas territory on the southern tip of the Iberian peninsula.

The British Gibraltar government expressed its hope that Spain and the UK will be able to reach an agreement on the Crown's overseas territtory border crossing with Spain after the UK leaves the EU, the chief minister of the Gibraltar Fabian Picardo wrote on Twitter Thursday.

Ricardo congratulated British PM Boris Johnson on reaching a trade deal, calling it the "largest trade deal in history" and a "huge relief given the potential difficulties that a no-deal Brexit might have created for the UK and the EU".

The Chief Minister of Gibraltar expressed his optimism toward reaching such an agreement.

I congratulate @BorisJohnson on the trade deal between UK & EU. A strong UK is best for #Gibraltar. This deal does not apply to 🇬🇮 or the Campo de Gibraltar. For us & those around us the clock is still ticking. We continue to work hand in glove with 🇬🇧 on agreement with 🇪🇸 pic.twitter.com/pkgfTjxF0w

Earlier in the day, Prime Minister of Spain Pedro Sanchez said Madrid and London would continue to negotiate for a Gibraltar border agreement.

“I welcome the principle of agreement between the EU and the UK ... Spain and the UK continue their dialogue to reach an agreement on Gibraltar", Sanchez wrote in a tweet.

​On Wednesday, Picardo told Spanish media the parties were negotiating a deal to facilitate daily crossings for citizens on both sides of the border, adding that they do not rule out a possible agreement on including Gibraltar in the Schengen area.

According to reports, several thousand people cross the Spain-Gibraltar border daily. Reportedly, Madrid and the British territory are nearing a deal that would mean that from January 1, there would be border controls for UK citizens entering the overseas territory, but Spanish and Gibraltar citizens could cross the land border freely.

The UK's ownership of Gibraltar, which has been disputed by Spain since the early 18th century, is not part of the negotiations, since the citizens of the British territory on the southern tip of the Iberian peninsula rejected any notion of shared sovereignty between the UK and Spain over the area.