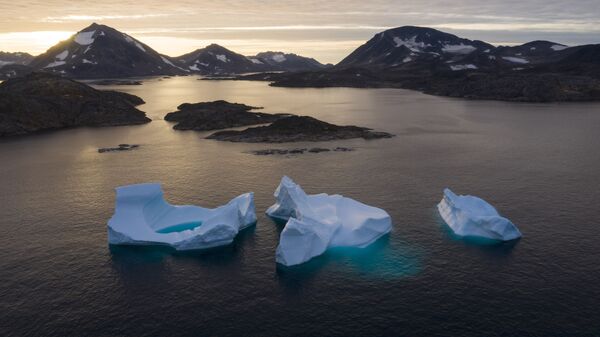 Svetlana Ekimenko
All materialsWrite to the author
Vertical ice caves in Greenland drain water from the ice to the sea and are believed to hide messages crucial to understanding climate change, energy and the environment.

Scientists have made a thrilling descent into the maw of a Greenland ice sheet by drilling deep into the ice to explore aspects of the area that contain secrets critical to climate change research, reports The Washington Post.

The team created two intersecting holes in the bed of a now frozen-over ice river, anchored their lines by running a rope through them and dropped into the vertical cavern, called a “moulin, publishing their findings 'Moulin Volumes Regulate Subglacial Water Pressure on the Greenland Ice Sheet', in the journal Geophysical Research Letters.

The hole, scientists believe, ultimately penetrates more than half a kilometre into the ice, joining a network of channels extending all the way to the base of the ice sheet.

“When you’re dangling the wall of this deep shaft and you’re hearing ice breaking and falling, it brings your heart up into your throat,” remembered Covington.

As the scientists dangled on the rope they took measurements using a device called a laser rangefinder, which reflects a laser beam to measure distance.

Covington and his colleague Gulley were motivated to attempt the perilous descent by a scientific question that is believed to bear tremendous implications for global research into the warming climate.

Firstly, there was the issue of just how vast are the ice caves found by the thousands across Greenland’s surface. There are concerns that they could be undermining the integrity of the second-largest sheet of ice on the planet as melting continues, expanding the moulins farther toward the center of Greenland.

In the summer, Greenland’s moulins swallow up a growing volume of meltwater, since the complicated topography of the Greenland ice sheet, which extends high into the air, will not allow the water to just run off its edge to the sea. Accordingly, it swooshes underneath the ice through the ice caves toward the ocean. At the end of that journey it elevates the sea level.

“These are big giant scary holes in the ice… Places that historically people have avoided. During the summer you have entire lakes that disappear down these things, sometimes overnight. Almost every river on the Greenland ice sheet disappears into these holes,” said Gulley.

Amid global fears over the implications of a warming climate the Arctic is registering the fastest warming up.
Increasingly more of Greenland’s surface is melting in the summer, with lakes forming at higher and colder elevations on the ice sheet, which has ceded some 4 trillion short tonnes of mass since 1992.

While they agree that surface melting makes up about half of the losses, the rest is suspected as being triggered by huge icebergs that break off into the sea.

​Greenland’s meltwater escapes through thousands of these ice caves. However, scientists needed to determine if these holes must be the surface entrance points to a sub-ice network of channels, draining off the melting water. Accordingly, it was suspected they were to blame for the destabilising of the Greenland ice sheet.

“If you keep the crevasse full of water, water is more dense, it is able to exert a force and it basically rips the crack open all the way to the base of the ice sheet,” said Gulley.

Concerns have been mounting that with this “network” taking in ever more water, the ice sheet itself may move faster toward the sea.

The suspicions were substantiated by the fact that each summer melting season speeds up the movement of Greenland’s ice toward the sea. Some of these fears were allayed by the theory that as more water gushes into the ice caves, it will form deeper channels in the ice, thus releasing some of the hydraulic pressure and lessening the sliding towards the sea.

The team of scientists first travelled to a western sector of the Greenland ice sheet to study the ice caverns together with Will Gadd, a famed ice climber.

According to Gulley, human exploration is vital, as it is extremely difficult to navigate drones in such small spaces, while under the ice sheet you can’t use GPS to guide them.

​The trailblazing results of the moulin descents, for example at Phobos moulin in western Greenland, offer observations of the extent of the caves with scientific modelling of the water levels contained within them. The team calculated that, at the water’s surface, the area of the cave was around 5,000 square feet much larger than previous models assumed.

The results of those studies also offer the potential future implications, as water in the ice caves can be exerting more pressure on the surrounding ice, and cause it to slide faster – precipitating sea level rise and potentially hazardous for Greenland’s future.

I've documented a lot of ice caves now, and they're all beautiful in different ways but this one stands out to me as one of Nature's masterpieces. Perfection in ice.

​Understanding how moulins operate in delivering water to the sea affect the speed of the ice’s movement is critical, claim scientists.

“The finding that larger-than-expected moulins are present in Greenland is significant, as these moulins provide a buffer between surface melting and the subglacial drainage system,” added Ádam Ignéczi, who studies moulins at Sheffield University in the United Kingdom, was not involved in the latest study.