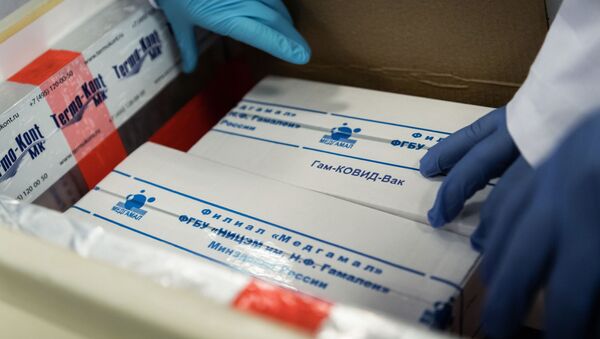 MOSCOW (Sputnik) - Russia is expected to ramp up the production of the Sputnik V vaccine against the coronavirus by 30 million doses by June, Russian Minister of Trade and Industry Denis Manturov said Thursday.

"Speaking of production, more than 2.5 million doses will have been produced in December, slightly less for the civilian use. But in January, according to the plans that have already been prepared and approved by the manufacturers, the number will be 3.5 [million], then it will grow to 18 by April, and 30 by June. But I am somewhat optimistic that it may happen even earlier than that," Manturov said in an interview with the RBC broadcaster.

During the COVID-19 pandemic, Russia emerged as a leader in vaccine development, as two of its products, Sputnik V, developed by Moscow’s Gamaleya Institute, and EpiVacCorona, developed by Siberia's research center Vector, are already in the Phase 3 trials. Another vaccine, by the Chumakov research center of the Russian Academy of Sciences, will begin Phase 3 trials early in 2021. The clinical trials of the trailblazer Sputnik V vaccine have demonstrated that its efficacy rate is over 90 percent.