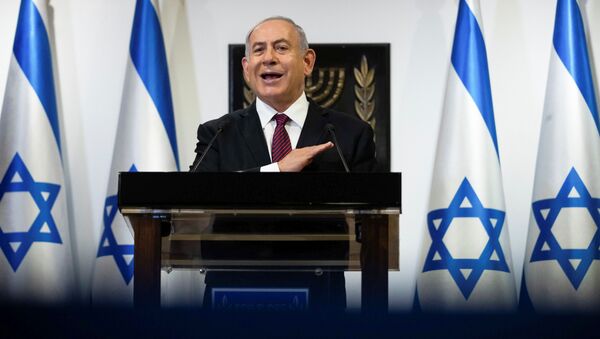 TEL AVIV (Sputnik) - Israeli Prime Minister Benjamin Netanyahu said at the graduation ceremony of the Israeli Air Force Flight Academy that the Jewish state would not allow Iran and pro-Iranian armed groups to gain a foothold in Syria.

"We continue to oppose attempts by Iran and pro-Iranian armed groups to establish a military base in Syria. We will not compromise on this issue, just as we will not compromise with our enemies' attempts to build precision missiles in Syria, Lebanon and elsewhere. We will not let Iran acquire nuclear weapons. We are not light-minded about threats against us, but we do not shy away from them," Netanyahu said in a statement.

"Our policy is clear and consistent: whoever tries to harm us will receive a crushing blow. In the face of danger, the [Israeli] Air Force is ready to act decisively - at any distance, in any arena and on any target," he said.

Last month, Israel Defence Forces stated they had struck Iranian Quds Force and Syrian Armed Forces military targets in Syria. The Syrian side stated that its air defence forces shot down several of those rockets, however, three were killed, and one was wounded as a result of the attack.

In recent years, Syria has suffered hundreds of airstrikes. Damascus has accused the Israeli military of conducting the attacks against its territory, while Tel Aviv had mostly avoided taking responsibility for the strikes until recently. In mid-December, the IDF claimed responsibility for numerous attacks throughout 2020, claiming they aimed at reducing Iran's "entrenchment" in Syria. Tehran has denied deploying any troops in Syria, apart from military advisers.

The tensions between Israel and Iran have been especially high recently following the assassination of Iran's nuclear physicist Mohsen Fakhrizadeh, who was killed in an ambush on his car convoy in late November. Iranian officials have blamed the assassination on Israeli spy agency Mossad.

Tel Aviv has neither refuted nor confirmed the allegations. Previously, however, it had claimed Fakhrizadeh was head of a secret Iranian military unit allegedly working on nuclear weapons. Iran has persistently denied allegations that its nuclear program is designed to create any type of nuclear weapon, insisting it serves only peaceful purposes.