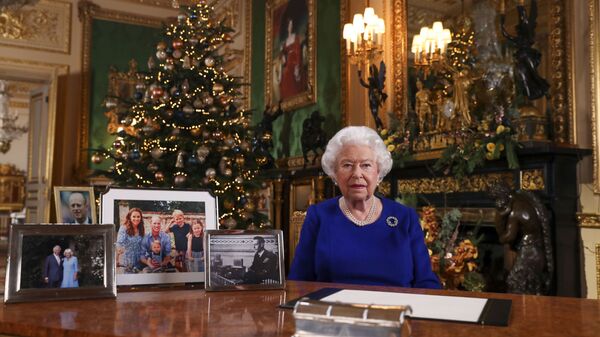 Aleksandra Serebriakova
Moscow-based Sputnik correspondent specializing in foreign affairs.
All materialsWrite to the author
As the BBC prepares to broadcast Queen Elizabeth II’s pre-recorded Christmas message on 25 December, Channel 4 gets ready to air an alternative version.

A British broadcaster has provoked outrage among royal fans after posting an online video of a “deepfake” Queen delivering a Christmas message.

The clip featuring a counterfeit Queen Elizabeth II "talking" was released on Channel 4's Twitter account to promote the station's own Christmas Day broadcast, which will offer “an alternative message for a very alternative year.”

​In a mocking parody of the traditional holiday greeting from the monarch, the "Queen" ponders over the difficulties 2020 has brought, including her grandson Prince Harry’s exit from the royal household to fly away to North America with his wife Meghan Markle and son Archie.

“On the BBC, I haven’t always been able to speak plainly and from the heart. So I am grateful to Channel 4 for giving me the opportunity without anyone putting words in my mouth," the Queen's virtual doppelgänger claims.

“2020 has been a challenging year for us all. One thing that has sustained many of us is our families,” the message goes, as the camera pans to reveal a photograph of the Duke and Duchess of Sussex next to a large portrait of Prince Andrew.

The Queen’s second son was another royal who has been making headlines this year after he was forced to step down from his official duties last November following a high-profile scandal over his friendship with convicted sex offender Jeffrey Epstein.

The clip does not touch upon the controversy surrounding Prince Andrew, but instead focuses on Megxit:

“I was so saddened by the departure of Harry and Meghan. There are few things more hurtful than someone telling you they prefer the company of Canadians."

Deepfakes are usually created through a synthesis of existing videos or images that are replaced with someone else’s likeness with the help of AI tools. They are often created for satirical purposes but have been employed for shadier activities, like fraud or spreading misinformation.

While many have found the deepfake featuring the British monarch pretty funny – and even outlined its important in highlighting misinformation – not everyone is amused.

Have fun at the Ofcom tribunal, Channel 4!

Oh, and you might want to hire more staff to deal with the complaints.

Brilliant!! I love the critical responses too. Clearly they don’t understand irony, our right to freedom of speech and good Britain satire which is sadly lacking these days! Well done!

Oh boy. Is a major broadcaster even allowed to do a deepfake of the Queen? Either way, I’m so here for it 👏

You don't find it funny. I do. It's satire. You don't watch it, and I will watch it.

Britain’s top Brexiteer Nigel Farage was apparently deeply offended by the clip, which he shared alongside a “how dare they” caption. Many also said that the deepfake was “offensive,” “ill-advised," and just generally a “very bad idea.”

Deep fakes are a really bad idea, which is why this is a good idea.

According to a Channel 4 spokesperson, the clip was a part of soon-to-be-aired series of programmes devoted to the study of deepfake culture.

“While the film is light-hearted, affectionate and comedic in tone, it carries a very important and timely message about trust and the ease with which convincing misinformation can be created and spread,” the spokesperson said.

The Queen’s real pre-recorded Christmas message is expected to air on BBC One and ITV on December 25 at 3 pm (GMT).