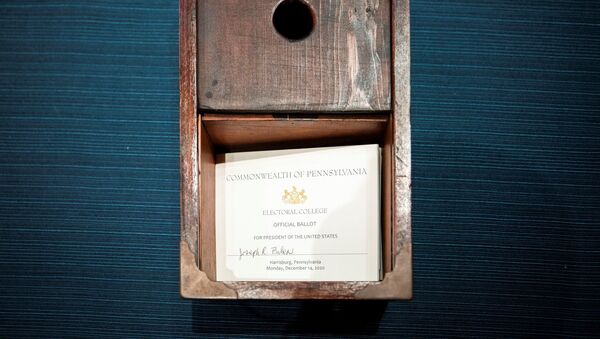 While Rep. Mo Brooks (R-AL) and Sen.-elect Tommy Tuberville (R-AL) were initially predicted to be the only GOP members to vote against the Electoral College results on January 6, a number of Republican lawmakers have joined the ranks, including Rep.-elect Madison Cawthorn (R-NC).

“I have a message for all other Republicans across the country,” Cawthorn said ina video message to the American people.

“If you are not on the record calling for fair, free and just elections now and in the future, I will come to your district and I will fund a primary opponent against you.”

Not doing this to help my career in Washington, in fact this will most likely harm it. But no one should go to Washington as a career. Go there to serve the people. And on behalf of the people I am contesting this election based on constitutional violations by key states. pic.twitter.com/puDmUZAbaw

​According to the lawmaker's social media post, his contesting of the election is tied to so-called "constitutional violations by key states."

Biden received 306 Electoral College votes earlier this month, well above the 270 margin needed to secure a victory over US President Donald Trump.

Rep. Jody Hice (R-GA) and more than dozen other lawmakers met with Brooks and US President Donald Trump to discuss the upcoming January 6 congressional meeting that will be presided over by Vice President Mike Pence.

"I will lead an objection to Georgia's electors on Jan 6," Hice tweeted on Saturday.

Big meeting today with @realDonaldTrump, @VP, the President's legal team, @freedomcaucus and other Members of Congress.

I will lead an objection to Georgia's electors on Jan 6.

The courts refuse to hear the President's legal case.

We're going to make sure the People can!

Reps. Brian Babin (R-TX) and Ted Budd (R-NC) have also publicly expressed their objection to the Electoral College vote certification. Some 20 Republicans have signed Babin's letter to congressional leadership demanding they investigate the US president's allegations of nationwide voter fraud.

This new support comes days after McConnell took to the Senate floor and congratulated Biden on his Electoral College victory. The Senate majority leader recently argued that he would be treating Biden “a hell of a lot better” than Senate Minority Leader Chuck Schumer (D-NY) “ever treated” Trump.

“I think the American people expect us to look for areas of agreement in a divided system while setting aside for debate the things we don’t agree on."

President Trump has repeatedly claimed that the election win was "stolen" from him via mass fraud and irregularities. However, he said that if the Electoral College votes for Biden as the next US president, he will "certainly" vacate the White House.