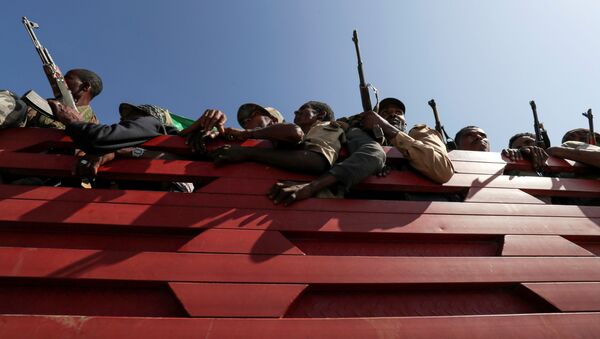 © REUTERS / Tiksa Negeri//File Photo
Subscribe
Maxim Minaev
All materialsWrite to the author
Earlier, more than 100 civilians were killed as a result of a series of attacks by militants in Benishangul-Gumuz, a state in western Ethiopia.

Ethiopia's Prime Minister Abiy Ahmed said that forces had been deployed to the Benishangul-Gumuz region amid the attack.

"The massacre of civilians in Benishangul-Gumuz region is very tragic," Abiy Ahmed said on Twitter. "The government, to solve the root causes of the problem, has deployed a necessary force."

Ethiopia has arrested five senior local officials in connection with security in Benishangul-Gumuz region, according to the state news agency.

Meanwhile, according to Fana TV, the military has killed 42 people involved in the attack on civilians in Benishangul-Gumuz region.

On Tuesday, over 100 civilians were killed as a result of a series of attacks by militants in Ethiopia's western state of Benishangul-Gumuz, an area where numerous ethnic groups live.
The attackers reportedly targeted members of the Amhara community.

Ethnic and religious conflicts among Ethiopians, which have led to the mass killing and displacements of citizens, are widespread across the country, especially in the so-called Metekel zone in the Benishangul-Gumuz region.

According to the authorities, all conflicts across the country have been triggered by the activities of the Tigray People's Liberation Front (TPLF), the ruling party of the northern Tigray province that is in opposition to the Ethiopian government.

In early November, the Ethiopian government launched a military operation in Tigray, accusing the TLFP of attacking a local military base to hijack weapons and arm anti-government militia. The government later claimed to have finished the operation with the capture of the region's capital, Mekelle.