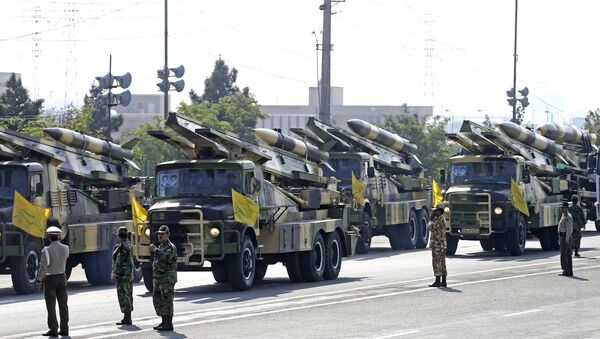 © AP Photo / Ebrahim Noroozi
Subscribe
Ilya Tsukanov
All materialsWrite to the author
Quds Force Commander Qasem Soleimani was killed in Baghdad, Iraq on 3 January 2020 in a US drone strike while on a clandestine goodwill trip to try to ease tensions between Iran and Saudi Arabia. Tehran responded by bombing a pair of US bases in Iraq, injuring over 100 soldiers, and has gone on to threaten more attacks.

US troops and diplomatic staff in Iraq face a “heightened risk” of attack from Iran or ‘Iranian-backed’ groups as the one year anniversary of Qasem Soleimani’s death approaches, Gen. Kenneth ‘Frank’ McKenzie, commander of USCENTCOM, the command responsible for the Middle East, has said.

The commander’s comments come just days after separate remarks earlier in which he warned that the US would be “prepared to react” if Iran launched an attack on the anniversary.

“We are prepared to defend ourselves, our friends and partners in the region, and we’re prepared to react if necessary,” McKenzie said in the earlier remarks. “My assessment is we are in a very good position and we’ll be prepared for anything the Iranians or their proxies acting for them might choose to do,” he added.

On Monday, the US Navy confirmed that the USS Georgia nuclear attack submarine, equipped with 154 Tomahawk cruise missiles, had passed through the Strait of Hormuz and entered the Persian Gulf. Israeli media then reported that an Israeli Navy submarine had visibly crossed the Suez Canal in what was dubbed a ‘show of force’ aimed at Iran.

The naval maneuvers come amid heightened regional tensions following the 27 November assassination of Mohsen Fakhrizadeh, a senior Iranian nuclear physicist and missile expert about 175 km outside Tehran. Iran blamed Israel for the brazen daylight killing and threatened to respond.

Iran reacted to the 3 January 2020 killing of Soleimani by lobbing over a dozen ballistic missiles at two US bases in Iraq, leaving over 100 US troops with traumatic brain injuries. In the months that followed, US forces in Iraq were subjected to dozens of artillery attack by unknown assailants, with the US claiming ‘Iranian proxy’ Shia militias who are also allied to the Baghdad government were involved.

‘Timing is Suspicious’: Tehran Slams Pompeo’s Claim About ‘Pro-Iranian Militia’ Attack on US Embassy
On Sunday, at least eight Katyusha rockets rained down on the highly-defended Green Zone district of the Iraqi capital, which contains the US Embassy compound, injuring an Iraqi soldier and damaging several buildings and vehicles. Iran vocally denied involvement, and blasted Secretary of State Mike Pompeo’s “anti-Iran accusations,” accusing him of seeking to “create tensions.” Tehran, a foreign ministry spokesperson said, “rejects any attack on diplomatic missions.”

Iran has repeatedly threatened further revenge attacks for Soleimani’s killing, with one official saying the only reason the Islamic Republic has not responded by assassinating a senior US military commander was because it could not “find anyone who is equally valuable.” Last month, an advisor to Supreme Leader Ayatollah Ali Khamenei called the January missile strike just the “initial slap” of revenge.