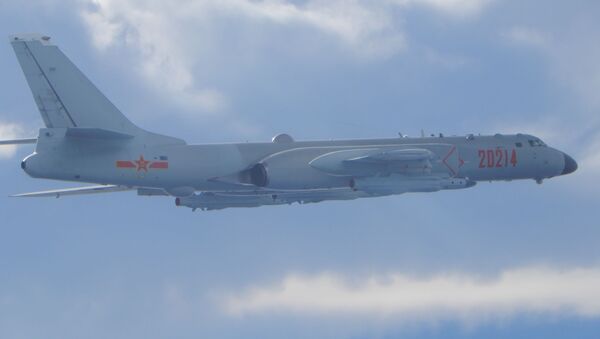 BEIJING (Sputnik) - The recent joint Russian-Chinese air patrol in the Asia-Pacific region is part of the annual military cooperation plan between Moscow and Beijing aimed at strengthening bilateral strategic cooperation and global security, and does not target any other state, the Chinese Defence Ministry said on Wednesday.

On Tuesday, the Russian aerospace forces and the Chinese air force conducted a joint air patrol in the Asia-Pacific region that lasted over 10 hours. Two Russia's Tu-95MS strategic bombers and four China's Xian H-6 strategic bombers participated in the patrol, which the sides said were conducted in strict compliance with the international law. At some points, the Russian and Chinese aircraft was escorted by Japan's F-15 fighters.

“The China-Russia joint aerial strategic patrol aims to further develop the China-Russia comprehensive strategic partnership of coordination in the new era, and enhance the level of the two militaries’ strategic coordination and joint operational capability to jointly safeguard global strategic stability. The patrol is part of annual military cooperation plan between China and Russia and does not target any third party,” the statement, published on the ministry's site, said.

Japanese Chief Cabinet Secretary Katsunobu Kato has said that Moscow and Beijing did not inform Tokyo in advance about the plans on joint air patrol carried out near the Japanese borders.

"Yesterday, four Chinese and two Russian bombers carried out a joint long-lasting flight from the East China Sea to the Sea of Japan in the Asia-Pacific region. The flight's duration surpassed 10 hours. The fighters of the Self-Defense Forces were alerted. Japan did not receive notifications on this flight in advance either from the Chinese, or from the Russian side. We have conveyed to the Chinese and Russian sides through diplomatic channels that this is of interest to our country," Kato said.

In July 2019, Russia and China carried out their first joint air patrol in the Asia-Pacific region with the declared aim of deepening bilateral relations and strengthening military cooperation between the countries, as well as facilitating global security. The patrol appeared to have been carried out in compliance with international law, though Japan and South Korea accused Russia and China of violating their airspace.