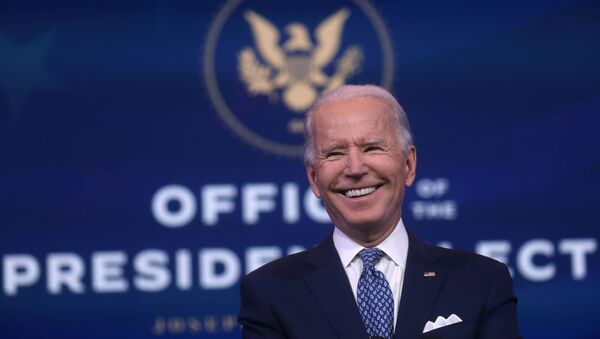 US media previously reported, according to obtained emails, that Hunter Biden had used his father's position as US vice president to make deals with Chinese, Ukrainian and other authorities and businesses.

"Yes, yes, yes," Joe Biden said when asked if he still thinks the stories about his son this fall were part of a Russian disinformation campaign.

Biden said his Justice Department will be independent when deciding how to proceed with the investigation into allegations of his son’s corrupt business dealings.

The president-elect added that there have been no discussions with his team or potential pick for US Attorney General about Hunter Biden’s legal troubles.

In addition, when he was asked by Fox News reporter Peter Doocy, Biden replied with mockery, calling him a "one-horse pony", saying "God loves you" while promising that under his administration, the Justice Department will be independent with respect to the investigation into his son.

Fox's Peter Doocy asks Biden if he still believes that "the stories from the fall about your son Hunter were Russian disinformation and a smear campaign."

After first mocking Doocy as a "one-horse pony" and saying "God love you," Biden replies "yes, yes, and yes" pic.twitter.com/R9l3yiYq5X

Hunter Biden announced earlier this month that the US Attorney's Office in Delaware is investigating his tax records, but added he is confident the review will show he acted legally and appropriately.

Hunter Biden did not report approximately $400,000 in income he collected after joining the Ukrainian energy company Burisma’s board of directors in 2014, according to media reports.

US President Donald Trump had earlier publicly called on the US authorities to investigate Hunter Biden for selling access to the office of US vice president and other corrupt practices in Ukraine, China and elsewhere. Trump has warned that Hunter’s questionable business dealings have compromised US national security.