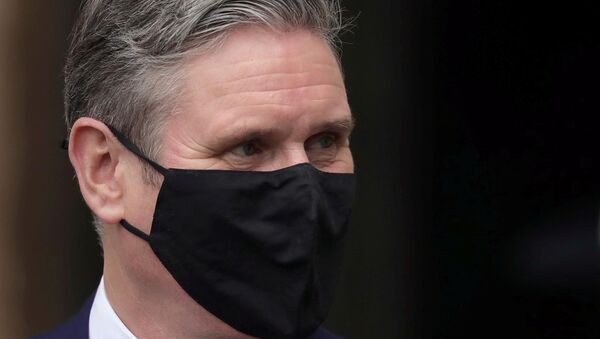 Tommy Sheridan
All materials
It is only days from Christmas and I should be full of festive joy and goodwill to all men but after Sir Keir Starmer’s ignorant, arrogant and irrelevant pontifications about Scotland, Britain and the timing of a second independence referendum yesterday I am consumed with a mixture of rage and irritation.

Rage that this alleged democrat supports denying the Scottish people their democratic right to another independence referendum in opposition to their expressed wishes in election after election and opinion poll after opinion poll.

After the sobering lesson of 2015 when Labour was humiliated and reduced to only one MP in Scotland, a humiliation repeated last December, this representative of the British Establishment resorts to pathetic name calling, labelling those who support independence as “separatists”, oblivious to the fact he insults the majority of Scots and the remaining Labour voters among them with his lazy and lamentable characterisation of Scottish citizens, who want to see Scotland return to the normality of nationhood the country enjoyed for many hundreds of years prior to the 1707 Act of Union which attached her to Westminster’s apron strings.

The word “separatists” or “separation” was deployed ten times during Starmer’s delivery of old, tired, and useless ideas about extending devolution instead of independence. Mince re-heated may be more palatable than cold mince but it is still mince, nonetheless. The perfect illustration of how old and tired his idea of a “constitutional commission” is was underlined by the announcement former Tony Blair lieutenant and failed Labour leader Gordon Brown would head up this unionist talking shop of yesterday’s politicians discussing yesterday’s ideas

Gordon Brown lost the 2010 general election and his deployment by the unionist brigade in 2014 to promise radical and extensive extensions of devolutionary powers in the shape of a last minute “Vow” plastered over the pages of unionist supporting press on the eve of the September 18th poll was credited with persuading older citizens to stick with Britain one last time but the vow proved empty in the face of further Tory austerity measures and English votes for Tory politicians and the Brexit vote of 2016 guaranteeing exit from the EU regardless of the 62% vote in Scotland to stay.

Gordon Brown’s credibility is zero in relation to the constitutional question in Scotland as his promises that the NHS would be saved with a NO vote and Scotland’s voice would be listened to more have both proved false to the core. The NHS is more at threat of privatisation than ever while Scotland’s voice is routinely ignored and ridiculed at Westminster whether it be in relation to Brexit, nuclear weapons, or welfare cuts.

The Vow Was Empty and Desperate Words to Save Britain

The recent Westminster endorsed Internal Market Bill usurps powers from the Scottish Parliament and shows without doubt that Parliament is far from permanent and can be obliterated by Westminster Tories at will. The fact the newspaper editor who hatched the “Vow” plan and wrote its terms has switched sides from the union to independence, is now an enthusiastic independence advocate, and an employee of the SNP at Holyrood displays just how out of touch Brown, Starmer and Labour are with their ‘improve devolution’ mantra. The debate has moved on during the last seven years. Scottish people are no longer satisfied with empty promises and deceitful tales about bigger slices of cake, they now want control of the bakery to shape and deliver their own future.

‘Democrat’ Starmer wants to ignore the democratic outcome of the 2015, 2017 and 2019 general elections, the Scottish Parliament election of 2016, and the expected result of the Scottish Parliament election of May 2021. The Scottish National Party (SNP) have won all of the elections since 2014 and are on course to romp next May’s election with polls predicting they will secure over 50% of all votes cast. Not only did the SNP win 45% of the votes at the 2019 general election and 48 of the 59 available Westminster seats on a clear mandate of IndyRef2 they now have the momentum of not a few or several opinion polls backing independence but a remarkable SEVENTEEN opinion polls in succession backing Scotland’s right to normal nationhood with support in several of those polls reaching 58%.

Sir Keir Starmer is Out of Touch with Scotland and Useless

What Starmer the British imperialist fails to understand or couldn’t care less about with his repeated use of the term “separatist” pejoratively is the fact a minimum of thirty percent and as high as forty percent  of the diminishing band of loyal Labour supporters also support Scottish independence. That Starmer is willing to insult at least one in three of his party supporters in Scotland with his snide references and pathetic re-heating of the devolution mince demonstrates without doubt that his constitution speech yesterday has nothing to do with winning support in Scotland and everything to do with proving his British Unionist lackey credentials to the Establishment in England.

The truth is Starmer is rapidly developing a reputation as the most ineffective opposition leader in modern times. He remains neck and neck in opinion polls with the most incompetent and ineffectual Tory Prime Minister ever. Only 4% believe Johnson has handled coronavirus well, yet Starmer languishes in poll after poll. He is clearly a Tory desperate to reshape Labour in his image. Before long the term ‘Starmerisms’ will be coined. Phrases like ‘as useful as a chocolate teapot’ and ‘as much use as an ashtray on a motorbike’ will jump to mind every time the name Keir Starmer is mentioned.

The man who politically stabbed Jeremy Corbyn in the back and front with his devious conniving behind the scenes fermenting internal strife, and promoted the disastrous ‘ignore the Brexit vote’ strategy that saw Corbyn’s magnificent performance in 2017 reduced by millions of votes in 2019 couldn’t care less about Scotland or Scottish Labour supporters. Preserving the British Union and the titles and domination it embodies is more important to Sir Keir than democracy and national freedom.