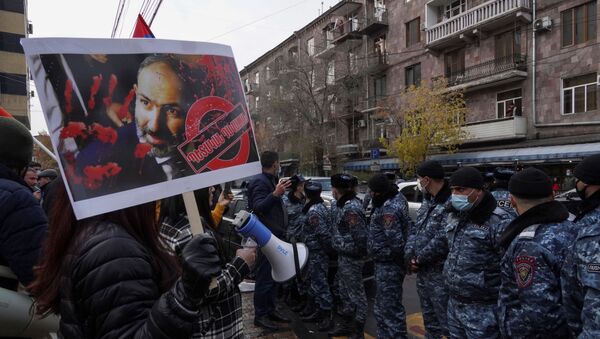 YEREVAN (Sputnik) - Protesters have set up the first four tents in the main square of Yerevan in front of the government building, and the security forces are not making attempts to remove them, a Sputnik correspondent reported on Tuesday.

He added that near one of the tents, representatives of the ministry of internal affairs were talking to the protesters. The security officers are not making any attempts to remove the tents. There are currently no clashes taking place among the protesters and the security units.

Protests have been ongoing in Armenia since November when Prime Minister Nikol Pashinyan agreed to a ceasefire that many Armenians interpreted as defeat in the Nagorno-Karabakh conflict. Dozens of opposition parties have united behind calls for Pashinyan to step down. The opposition forces have called for former Prime Minister Vazgen Manukyan to head the government.

In November, the leaders of Russia, Armenia and Azerbaijan adopted a joint statement on the cessation of hostilities in Nagorno-Karabakh in the wake of a six-week conflict. The warring sides have agreed to terminate at the effectively occupied territories, as well as exchange prisoners and bodies of dead soldiers. Russia has deployed 1,960 peacekeepers to monitor the truce.