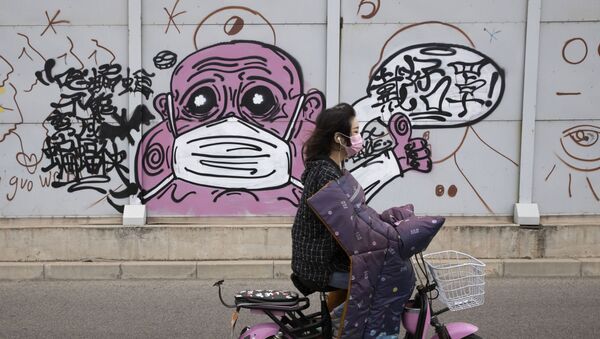 © AP Photo / Ng Han Guan
Subscribe
International
India
Africa
Notwithstanding the miracles of modern science, the post-COVID-19 world is in need of more than just a vaccine. The global economy has struggled to emerge from the unprecedented plunge of early 2020.

The article is an opinion piece by Stephen Roach, a faculty member at Yale University and former chairman of Morgan Stanley Asia chair. He is the author of Unbalanced: The Codependency of America and China.

Like a swimmer gasping for air after surfacing from a deep dive, there was a powerful rebound as lockdowns came to an end. But reopening after a sudden stop hardly qualifies as a self-sustaining economic recovery. Vaccine or not, the outlook for 2021 is likely to be far more challenging than a post-lockdown bounce might suggest.

History speaks to long shadows of major pandemics. Permanent disruptions to both aggregate supply and demand, reinforced by a rethinking of behavioral norms, tend to compromise the economic healing process. As a result, post-pandemic economies are typically afflicted by a lingering vulnerability that is highly susceptible to aftershocks. The post-COVID-19 world is unlikely to be an exception.

The first half of 2021 seems poised for just such a setback. Apart from China, where the discipline of public health practices took precedent over economic stimulus, the long-feared second wave of COVID-19 infections is now at hand. This has prompted a new round of lockdowns in most major developed economies — especially the US, Europe, Japan, and Canada. To be sure, these lockdowns are not as severe as they were when the first wave hit, but they are still likely to result in significant disruptions to economic activity. And they are coming at a time when seasonal shopping tends to peak — pointing to a pronounced shortfall in seasonally adjusted activity.

For both the US and European economies, that spells heightened risks of "double-dip" recessions in the months immediately ahead. The relapse scenario stands in sharp contrast to the V-shaped recovery that financial markets seem to be counting on. Optimism rests more on the zero interest rate policies of major central banks rather than on resilient growth trajectories. That may end up being a well-justified leap of faith. While the path ahead is likely to be treacherous before "herd immunity" takes hold a year from now, I share in the hope that a vaccine will eventually put the world economy on a path of global healing.

At the same time, it is important not to lose sight of other risks to the global economy. The US-China conflict is at the top of my worry list. With the trade war having morphed into a tech war that has now taken on the early manifestations of another Cold War, the relationship between the world's two largest economies is at a critical juncture. The post-pandemic outlook is critically dependent on shifting from conflict escalation to conflict resolution. Can that happen in 2021?

The answer will very much depend on the willingness of both nations to find common ground for mutual cooperation rather than confrontation. The presidential leadership transition in the US from Donald Trump to Joe Biden offers such an opportunity. But that won't be easy to accomplish. Mounting tensions between the US and China long predate the ascendancy of Trump. It will take leadership, vision, and political courage to alter the course of conflict escalation. This will require nothing short of a new framework of engagement between the US and China. Three building blocks should be emphasized:

Dialogue. Periodic strategic and economic summits — whether biannual (during the George W. Bush era) or annual (during the Barack Obama era) — achieved little. A better approach would be to establish a permanent Secretariat in a neutral jurisdiction that deals full-time with all aspects of the US-China relationship — from trade and technology to cyber and people.  Staffed with professionals from both nations, the Secretariat would have responsibility for data sharing, framing joint policy proposals, implementation of mutual agreements, compliance, and transparent dispute adjudication.

Trade. The focus, instead, should shift to a correction of saving disparities — with the US saving more and China saving less — as the means to alleviate the global trade imbalances of the world's two largest economies. This would have the added and important benefit of strengthening the domestic economies of both nations. As China draws down its surplus saving, internal demand will find new support — consistent with the new emphasis on "dual circulation" aimed at boosting internal consumption. Similarly, if the US commits to medium-term improvement in domestic saving, investment and productivity should improve — boosting longer-term US economic growth. Growth challenges for any economy are best addressed from a position of strength, not weakness. A correction of saving and trade imbalances is key to unmasking such strength.

Structural considerations. Ultimately, the focus of US-China conflict resolution needs to shift from bilateral trade to key structural issues such as intellectual property rights, technology transfer, subsidies to state-owned enterprises, and cyber security. The US-China structural agenda should be framed around expanded growth opportunities that come from improved access to each other's markets. Negotiations should be restarted on a bilateral investment treaty (BIT) as the principal means for enhanced rules-based market access. This is a time-tested approach to opening-up that both nations have long embraced. The US has signed 42 such treaties and China has over 100 BITs currently in force.

Such a treaty would eliminate ownership caps on direct investments by multinational corporations in each market. That single provision would eliminate the joint-venture structure of cross-border investments, taking the thorny issue of forced technology transfer off the table. No JVs, no transfer of anything from one partner to another. A broad, enforceable BIT (its implementation falling under the purview of the Secretariat outlined above) could also be used to address contentious disputes over IP rights, state-supported industrial subsidies and cyber security.

It won't be easy for either nation to stand down after years of escalating conflict. At first, small steps will be required of both the US and China to rebuild a spirit of trust and mutual cooperation. But small steps are far preferable to staying the current destructive course. A vulnerable global economy, struggling under the long shadow of a devastating pandemic, is in desperate need of leadership from the world's two most powerful nations. There is no room for a great power conflict in a post-pandemic world.

The article was originally published on The Global Times site.