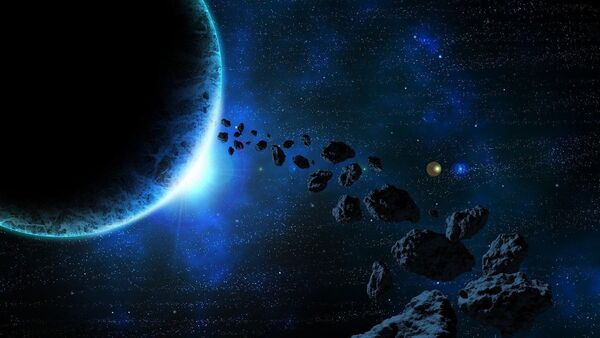 Andrei Dergalin
All materialsWrite to the author
While the parent body of the meteorite studied by the research team is reportedly believed to no longer exist, its very presence in our solar system suggests that other similar objects “could potentially have done the same”.

Having studied the remains of a meteorite that exploded above Sudan back in 2008, a team of scientists managed to obtain important clues about the nature of its parent body, Science Alert reports.

Having subjected to spectral analysis a 50-milligram sample (AhS 202) of the space rock designated 2008 TC3, whose fragments showered upon the surface of our planet over a decade ago, the researchers found "an extremely rare form of hydrated crystals... known as amphibole", the media outlet notes.

"Our surprising result suggests the existence of a large, water-rich parent body," said Vicky Hamilton, planetary geologist from the Southwest Research Institute in Boulder, Colorado and first author of the study.

The scientists reportedly postulate that 2008 TC3 might have originated from a larger body whose size would be comparable to dwarf planet Ceres, as most carbonaceous chondrite parent bodies "are thought to be less than 100 km in diameter, and thus would not be sufficiently large to produce the range of pressure and temperature conditions represented by the mineral assemblage" in the shard that they examined.

"As such, it is our interpretation that the original parent body of AhS 202 was probably an unknown object, potentially Ceres-sized (~640–1,800 km in diameter under the most likely conditions)," the team states.

The media outlet also points out that while this parent body "is thought to no longer exist", the very fact of its previous presence in our solar system suggests that "more of its kind could potentially have done the same".

"We are not proposing that AhS 202 is a spectral analogue for Bennu or Ryugu; rather, AhS 202 is a serendipitous source of information about early Solar System materials that are not represented by whole meteorites in our collections," the researchers surmise.