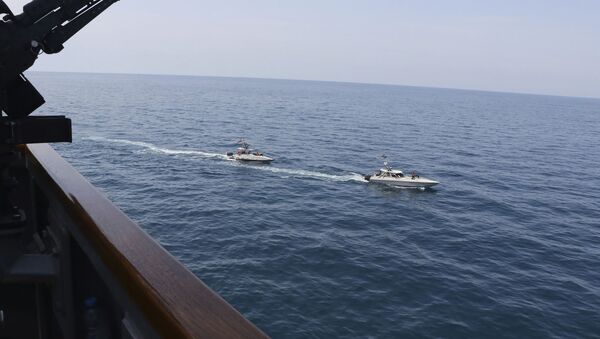 © AP Photo / U.S. Navy
Subscribe
International
India
Africa
Mary F.
All materialsWrite to the author
Tension between the US and Iran has been high since the US assassinated top Iranian General Qasem Soleimani, the head of the Islamic Revolutionary Guard Corps' (IRGC) Quds Force, in Iraq on January 3, 2020.

Relations between Washington and Tehran took a turn for the worse this week after the guided-missile submarine USS Georgia entered the Persian Gulf through the Strait of Hormuz on Monday in the US’ latest deterrence mission against Iran. The submarine was accompanied by two American warships, the US Navy confirmed.

The submarine’s entrance into the Persian Gulf comes amid heightened tensions with Iran, especially after US Secretary of State Mike Pompeo blamed Iranian-backed militias for a rocket attack on the US Embassy compound in Baghdad on Sunday. According to NPR, which cited US diplomatic sources, the attack killed at least one local civilian. However, no embassy personnel were killed or injured in the attack.

In a recent statement, the US Embassy in Baghdad condemned the attack, calling it a “violation of international law” and an assault on the “sovereignty of the Iraqi government,” NPR reported.

“We call on all Iraqi political and governmental leaders to take steps to prevent such attacks and hold accountable those responsible,” the statement adds.

In a Sunday statement, Pompeo also denounced the attacks.

"The United States strongly condemns the latest attack by Iran-backed militias on the International Zone in Baghdad," Pompeo said.

"We wish those hurt a speedy recovery," he added.

A Navy official confirmed to Fox News that the latest warship movements in the Persian Gulf were “long planned” as the anniversary of Soleimani’s death approaches and were not conducted in response to the embassy attack.

Iran's relations with the US and other countries have been especially strained following last month’s killing of Mohsen Fakhrizadeh, a senior Iranian scientist who helped lead the country’s nuclear program.

The top nuclear scientist was killed by gunfire east of Tehran. Iran’s Supreme National Security Agency has said that Israeli spy agency Mossad and the People's Mujahedin Organization, an Iranian political-militant group banned in the country, were involved in the assassination.