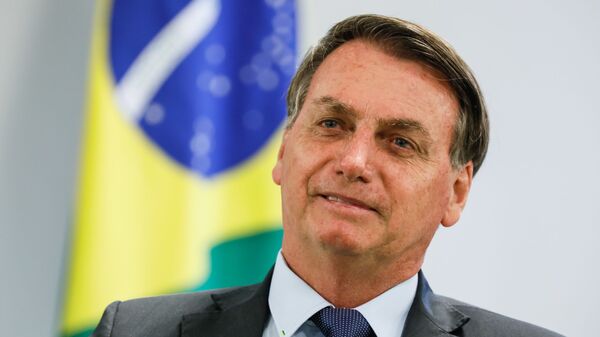 Mohamed Elmaazi
All materialsWrite to the author
The British government's private contacts with Brazil's current president on behalf of powerful corporate interests, well before he was elected to office, may explain why the COVID-19 vaccine developed by UK firm AstraZeneca is still the only one purchased by the South American government, an investigative journalist tells Sputnik.

The British government was secretly lobbying Brazilian President Jair Bolsonaro, on behalf of major UK corporations, before he was even elected to the presidency in 2018, according to documents obtained by news outlet Brasil Wire. John McEvoy, who co-authored the exclusive with Nathalia Urban and Daniel Hunt, explained to Sputnik the significance of their discoveries, as outlined in their article “Strategic Partners”: Britain’s secret lobbying of Bolsonaro for Big Pharma, Oil and Mining.

Sputnik: Explain what it is you and your colleagues found vis-à-vis these documents showing pre-electoral lobbying of Jair Bolsonaro by the UK government?

John McEvoy: We found that the British government was secretly lobbying [right-wing] candidate Jair Bolsonaro before the 2018 presidential election. The then-British ambassador to Brazil, Vijay Rangarajan, invited Bolsonaro to a private meeting at Rangarajan's personal residence with Britain's 'Strategic Partners' in Brazil. Those 'Strategic Partners' are a list of Britain's main corporations - BP, Shell, AstraZeneca, Anglo-American, and others. We also have details of more meetings between Bolsonaro and British representatives before, during, and after the 2018 election campaign. Bolsonaro has presided over considerable human rights abuses and a disastrous COVID-19 response, so it's important to know what Britain's role is in the country.

Sputnik: Is it not normal for governments to lobby each other?

John McEvoy: Yes, it's normal - part of the Foreign, Commonwealth and Development Office's (FCDO) remit is to protect and support British businesses abroad. But Jair Bolsonaro - a man who called for the return of a dictatorship to Brazil and is overt in his hatred of Brazil's Indigenous communities - is not normal. In this context, it was quite clear in June 2018 what supporting BP or Shell, for instance, in Brazil might entail - expansion into Indigenous territory, human rights abuses, and the sale of Brazil's sovereign resources. Now we've also seen Bolsonaro's disastrous COVID-19 response. He's placed almost all of Brazil's hopes in the AstraZeneca vaccine while refusing to place orders for other, more viable options. Almost 200,000 Brazilians have now died from COVID-19, and it's worth asking whether British lobbying efforts contributed to this disastrous policy.

Sputnik: What is the significance, if any, of the fact that these lobbying efforts began before Bolsonaro was elected?

John McEvoy: I think it's important to get details of any and all British communication with Bolsonaro... But it's also important that this communication occurred before the election given Britain's long, well-known record of interfering in foreign elections. If Bolsonaro refused to play ball with British capital, might he have been concerned that Britain would have covertly supported another candidate?

Sputnik: Are there examples of the Brazilian government favouring UK business interests over their own because of this lobbying?

John McEvoy: Bolsonaro's reliance on the AstraZeneca vaccine has been described as "absurd" and "homicidally dangerous". This is perhaps the most prescient example, but BP, Shell, and Anglo-American have also expanded their presence in Brazil. Bolsonaro has effectively overseen a firesale of Brazil's natural resources, and these British mining companies are among those that stand to most profit.

Sputnik: Where did these documents come from?

John McEvoy: We've been in a bit of a protracted Freedom of Information battle with the FCDO for the past year or so. We're slowly getting more and more details of British relations with Bolsonaro before, during, and after the extremely controversial 2018 presidential election in Brazil. It was effectively the product of a slow coup - the Worker's Party (which improved the life of Brazil's poor in basically every socio-economic metric you can imagine) had one candidate impeached, and another, the election front-runner, jailed on totally dubious charges.