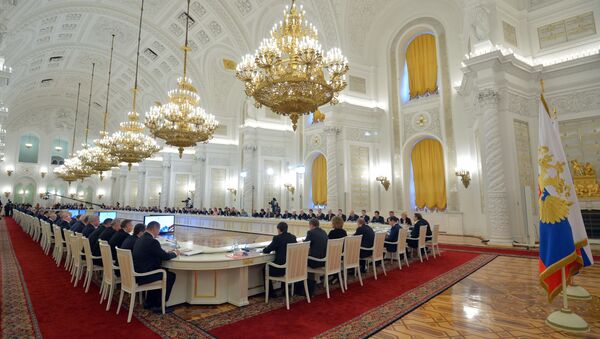 © AP Photo / Alexei Druzhinin, Presidential Press Service
Subscribe
Ilya Tsukanov
All materialsWrite to the author
The powers and role of the State Council, the advisory body to the Russian head of state, have been increased following this summer's national vote on amendments to the Russian Constitution.

Russian President Vladimir Putin has confirmed the members of the State Council of the Russian Federation, and will serve as its head, a decree published on the official portal of legal information on Monday indicates.

The new State Council will differ from its predecessors both in composition and functions, with its powers expanded following the approval of amendments to the Russian Constitution after a week-long national vote in late June and early July. Russian lawmakers formally adopted a bill on the status, organisational, and legal foundation and activities of the State Council in November and the bill was signed into law by the president on 8 December.

According to the decree published on Monday, the State Council will consist of Prime Minister Mikhail Mishustin, governors, the speakers of the State Duma and the Federation Council (Russia's two houses of parliament), leaders of parliamentary parties, presidential envoys to federal districts, representatives of public associations, and other officials, numbering 104 people in total. Some of its members will serve on a rotational basis.

The organ will include 18 commissions for social and economic development, ranging from public administration (to be headed by Moscow mayor Sergei Sobyanin) to the digital economy, healthcare, and foreign investment. For example, one commission's duties will be to carry out analyses of the work of state organs at various levels and to provide recommendations to improve their efficiency, with former Yeltsin-era prime minister Sergei Kiriyenko earmarked for this role.

Putin Expects His Presidency to End at Some Point
The original State Council was established by Putin in September 2000, less than a year into his first term in office, to advise the head of state on matters of national importance. It succeeded similar organs which existed in the Soviet and Czarist periods.

Commenting on the new, more powerful council's role in governance, Secretary of the State Council Igor Levitin said the new format would enable the council to fulfil one of the promises of the amended Russian Constitution.

"The amendments to the constitution have introduced a new legal category – public power. To ensure the coordinated functioning of all authority, to take their views into account when making decisions, special powers are required. These powers are provided by the [new] law on State Council," Levitin said.