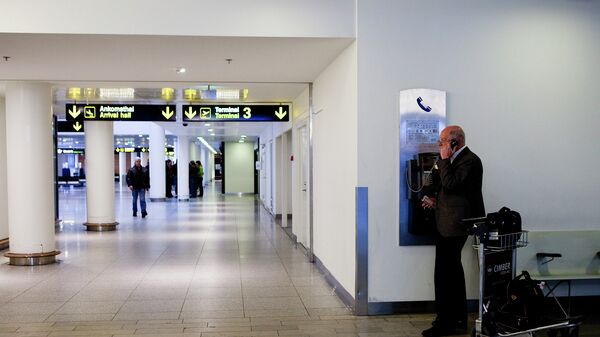 © AP Photo / Polfoto, Thorkild Amdi
Subscribe
International
India
Africa
Igor Kuznetsov
All materials
Norway is so far the only Scandinavian country that has so far refrained from imposing traffic restrictions on the UK. However, its health authorities are considering whether Britons should be allowed to come to Norway for Christmas or not.

European countries are stopping air traffic with the United Kingdom over reports of a new, more contagious version of the coronavirus, named N501Y. According to preliminary analysis, it can be up to 70 percent more contagious than other known strains of the virus.

In addition to Germany, Belgium, Italy and the Netherlands, which have already suspended flights from Britain, most Scandinavian countries did the same.

Denmark, where nine cases of N501Y have been found, will close its airspace for flights from the UK starting from Monday for at least 48 hours onwards, Health Minister Magnus Heunicke tweeted. This is being done in a bid to stop the further spread of the coronavirus, TV2 reported.

The Ministry of Transport wrote in a press release on Monday night that the decision to close the airspace is based on an assessment from the health authorities.

“The mutated coronavirus, which has spread rapidly in London and other parts of England, can, according to health authorities, make it more difficult to control the infection. The government therefore chooses to close flights from the UK for 48 hours, so there is more time to assess what further measures should be taken”, Transport Minister Benny Engelbrecht said in the press release.

On Sunday evening, Sweden pledged to follow suit and introduce a temporary entry ban on people arriving from the UK.

“We are preparing a decision on a ban on travel from the UK. It should be able to take effect as soon as possible,” Interior Minister Mikael Damberg told national broadcaster SVT.

The ban will apply to those arriving by plane, boat and car. Swedish citizens travelling from the UK may be quarantined on arrival.

According to Karin Tegmark Wisell of the Swedish Public Health Agency, no cases of the mutated coronavirus have been identified in Sweden so far.

Finland imposed a ban of its own on Sunday night. The decision to stop air traffic from the UK was announced by Finnish Transport and Communications Agency Traficom's Director General Kirsi Karlamaa. The ban applies from 21 December to 4 January, national broadcaster Yle reported.

Norway so far remains the only Scandinavian country not to ban air traffic from the UK. However Health Minister Bent Høie said the authorities were considering stricter rules for those arriving from the UK. He reminded of the quarantine rules and encouraged testing. Norwegian health authorities are reportedly considering whether Britons should be allowed to come to Norway for Christmas or not.

At a press conference on Saturday, the British government informed that a large number of cases of new mutated virus have been found, which is estimated to account for over 60 percent of new cases in London. British Health Minister Matt Hancock said that the mutated version is “out of control”.