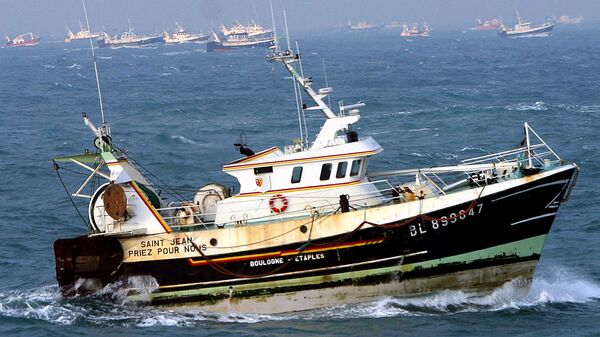 © AP Photo / MICHEL SPINGLER
Subscribe
International
India
Africa
Sofia Chegodaeva
All materialsWrite to the author
Earlier in the day, the Labour Party leader, Sir Keir Starmer, rejected the idea of calling for an extension to the Brexit transition period because of the coronavirus crisis and urged the Prime Minister to prove he can "get Brexit done" with his promised "oven-ready deal".

France will give the UK "a few more days to reach an agreement that respects our priorities and red lines", French junior EU affairs minister Clément Beaune was quoted by Reuters as saying.

This comes as earlier on Monday, the UK Labour Party leader, Sir Keir Starmer, rejected the idea of calling for an extension to the Brexit transition period. He also urged Prime Minister Johnson to prove that he can keep his promise and "get Brexit done".

On Sunday, major UK media reported, citing government sources, that no deal was still the most likely scenario in the UK-EU talks. Brussels has been reluctant to change its mind on maintaining rights to most of the catch from UK fishing waters.

"A no-deal scenario looks like the most likely scenario as the situation stands currently. However, as we know with the EU’s history in trade negotiations, last minute deals are the bloc’s forte. There is no reason to think that this deal will be any different so expect material change and compromise in the days ahead. Fishing issues, I believe, can be ironed out. The Scottish First Minister Nicola Sturgeon has requested an extension to talks, but the British government wants to keep the pressure on, and the practicalities of an extension agreement and its terms being drawn up and voted on positively by all the EU 27 before the end of the year, is highly unlikely at this stage. The likelihood of a no-deal Brexit remains high in my opinion, particularly on the issue of ‘the level playing field of trade’ and mechanisms for resolution. The government may need to be prepared to lose political capital with sections of the British public if a spirit of compromise and fairness is embraced and the economy rescued at the last minute from the no deal Brexiteers", says Dr Ian Crowther, a senior lecturer in banking and financial markets at the Department of Finance Accounting and Business Systems at Sheffield Hallam University.

The UK-EU talks on post-Brexit trade have been stalled for months amid different views each of the sides has on the question of fishing quotas, the so-called "level-playing field" and governance. If no deal is reached before the end of the year, the WTO rules will take immediate effect as of 1 January, including customs tariffs and full border checks for UK goods crossing the English Channel.