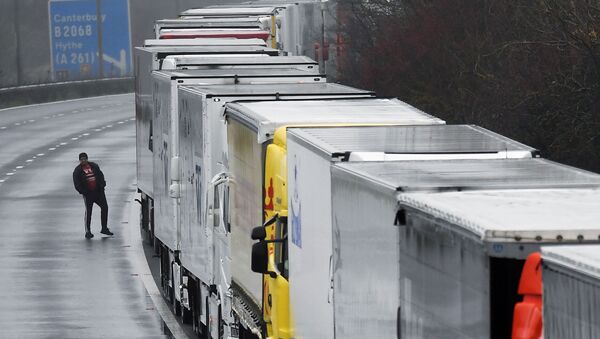 © REUTERS / TOBY MELVILLE
Subscribe
International
India
Africa
As Brexit talks continue, a new strain of COVID is wreaking havoc in the UK, with European nations imposing travel bans on the country and France introducing restrictions on freight transport across the English Channel.

Former UKIP leader Richard Braine spoke to Sputnik about the growing calls for an extension to the EU transition period, why Nicola Sturgeon is the ultimate Remainer, and how Britain has been handed the perfect opportunity to say ‘no deal!’

Sputnik: Do you think there should be an extension to the EU transition period after another deadline for a Brexit deal set by the European Parliament passed with no sign of progress?

Richard Braine: Absolutely not. We've had four and a half years. This whole situation should have been sorted out in 2016. There was never a reason to delay. What this is, is a political establishment. And, frankly, an EU empire, trying to avoid Brexit altogether by delaying and obstructing and finding every possible way to avoid the inevitable. Which is that the UK has got to leave the EU, we voted for it. It's absolutely clear. And if we don't, then democracy is pointless.

Sputnik: Given that the European nations have imposed travel bans on the UK, is this not now the perfect opportunity for the government to draw a line under negotiations and announce a no deal Brexit?

RB: It was clear that the EU was never going to offer anything like sensible terms. It's obvious that it wouldn't, because that means its own demise as a political organisation, a political project. And so for that reason, it's always been the right thing to do. To simply and unilaterally declare that we have left under our own laws. And I'm certain that once we do get to that point where we simply have left, we've stopped paying contributions, we've stopped paying attention to EU law and the EU's efforts to rule over us, in its undemocratic fashion, then the EU will have to come to its senses very quickly.  Because, you know, Mercedes Benz and BMW and Volkswagen, and all the other European industries that are quite dependent on UK business, we're a major, major customer for all of those businesses. We really are what the EU calls “Treasure Island.” Because we buy an enormous amount of EU goods, we have a 100 billion trade euro deficit with the EU. So as soon as we really have left, the EU will simply be forced to enable beneficial trade and business with the UK, it won't have a choice, it can try to blockade. But that wouldn't work because the commercial forces will outweigh the ideologues in Brussels. Once really big corporations start to realise that this is hurting their bottom line. Eighty-five percent of the world's market is outside the EU. So we can get all the olive oil and wine that we need from the world, which is more able to supply it today than it ever has been in history. So the UK won't go hungry. We can, you know, buy products elsewhere. We don't have to play the game. And so as a consequence of that, yes, we really must simply declare unilaterally, we're out. We're always willing to listen if you want to come to better terms over trade. But if you try to blockade us, we will simply go elsewhere.

Sputnik: Nicola Sturgeon has said that the new COVID strain and its various implications mean we face a profoundly serious situation which demands all of our attention. As a result, she argues it would be unconscionable to compound it with Brexit. What do you make of these comments?

RB: I think that she looks increasingly wild and isolated. And I think that fewer and fewer people are taking her seriously. I hope that Shetland does go ahead and declare its independence from Scotland, to give her a message that her kind of obsolete politics needs to be sent back where it belongs into the trash can. The UK is a huge success and has been for 300 years. The cousins, the English and the Scots, have done amazing things in the world and have a great history that we should be proud of. And as a consequence, I don't think that independence is any more beneficial to Scotland. Scotland voted to remain part of the union with England, Wales and Northern Ireland, and the Scots voted for it. So that's what must happen and Sturgeon is the ultimate Remainer. She ignores the vote of the people, like the Remainers do, and she pretends that Scotland didn't vote the way it did. Scotland voted to be in the UK and the UK voted to be outside the EU. And those are the things that should and must happen.

Sputnik: Michel Barnier has also warned that Britain must be prepared to respect the EU sovereignty if talks on a post Brexit trade are to succeed. What are your thoughts on this statement?

RB: The British have absolutely no interest in having sovereignty over the EU. And so for him to be saying, 'we must have our sovereignty' what he's really hinting at is that the EU thinks it has a right to, for instance, UK fishing waters and many other aspects of UK trade and business. And I think he's starting to look ridiculous. Well, he's looked ridiculous for a while perhaps, but now the threats are emptier and emptier. He reminds me of the Black Knight from Monty Python's Holy Grail who threatens to bite his opponent after he had his arms and legs cut off. The threats that he's promised, have been empty. I think that the Irish border problem will be solved intelligently. And I don't think we're going to see the problems that he has tried to ferment in that part of the country. And I think that it's a disgraceful thing that he is the kind of person who has sought to reignite and open the wounds of the Irish problem.