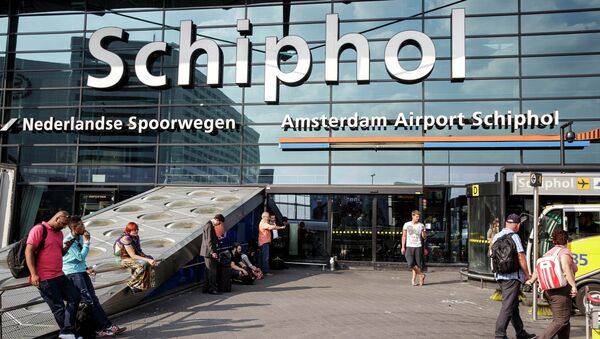 MOSCOW (Sputnik) - The Netherlands is banning flights from the United Kingdom starting Sunday because of a new strain of the COVID-19 coronavirus that threatens to spread far more rapidly than other variants, the Dutch government announced in a statement.

According to the Sunday government statement, sampling cases in the Netherlands in early December revealed the same virus strain as that observed in the UK. Following the latest reports from Britain, this case is being investigated further.

The release also says that the Dutch National Institute for Public Health and the Environment (RIVM) has reviewed  travel advisories for people arriving in the Netherlands from the United Kingdom.

"Pending further details and greater clarity on the situation in the United Kingdom, RIVM has advised that the risk of the new virus strain being introduced to the Netherlands should be minimised as much as possible by restricting or regulating travel from the UK. As a result, the Dutch government decided […] to take the following precaution: at 06:00 local time [05:00 GMT] on 20 December a ban on flights carrying passengers from the United Kingdom will enter into force," the government statement says.

The new travel ban will remain in place until 1 January, 2021, at the latest.

Earlier, the World Health Organization (WHO) tweeted that it was in close contact with UK officials regarding the new mutant coronavirus strain and would release additional information on the new virus variant discovered in the UK as it becomes available. The organization urged people to comply with local coronavirus guidance and take protective measures.

On Saturday, UK health officials announced that the country had identified a new mutated variant of COVID-19 that can spread more quickly than other coronavirus strains.

British Prime Minister Boris Johnson has introduced fresh coronavirus restrictions, particularly in London and southeast England, to try to prevent the new virus strain from spreading across the country.