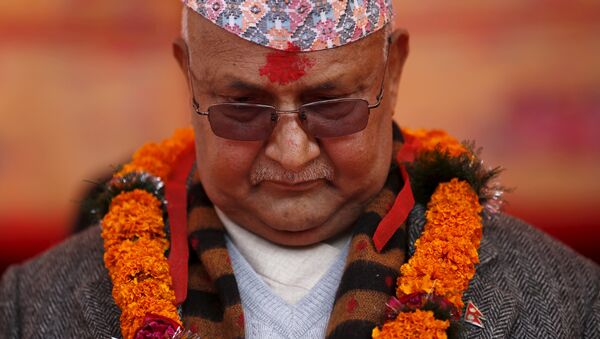 “The president has endorsed the government's recommendation to dissolve the House,” a spokesperson of the president's office, Badri Nath Adhikari, said on Sunday, quoted by the state-run Chinese Xinhua News Agency. “She also has approved the new election date.”

As the parliament’s two-year term has not yet expired, the office said that a Bhandari approval of Oli's request, presented by the prime minister following a Sunday Cabinet meeting, was based on articles 76 (1) and (7) and 85 of the country’s constitution, adding that a new parliamentary election will take place in two phases on 30 April and 10 May 2021.

Over the past months, there has been “a power tussle” between the PM and the leader of the former Maoist rebels over their power-sharing agreement and a lack of consultation, according to the AFP. Oli refused to succeed Dahal as the prime minister or lead the NCP, causing problems within the party, The Washington Post reported.

One source in the Communist Party told the AFP that Oli dissolved parliament because there was a possibility that members of the House of Representatives, including NCP lawmakers, intended to conduct a no-confidence vote against the prime minister.

Soon after the premier submitted his request to Bhandari earlier in the day, 90 NCP House representatives “rushed” to register a vote of no-confidence, according to the AFP.

Some opposition leaders accused Bhandari of committing a “political crime” by approving Oli’s recommendation without consultation.

“The president has also become part of the political crime by quickly endorsing the prime minister's move without consultation,” said Gagan Thapa, an opposition leader from the Nepali Congress party, cited by the AFP.

Among responses to the dissolution of the country’s legislative body, seven members of Oli’s cabinet resigned following the move, arguing in a statement that it goes “against the people's mandate and political principles”.

Protests were also reported to have taken place on the streets of the Nepali capital of Kathmandu following the parliament dissolution and the announcement of early elections. Demonstrators slammed the prime minister's decision as “unconstitutional” and demanded its withdrawal, according to Indian outlet ANI.