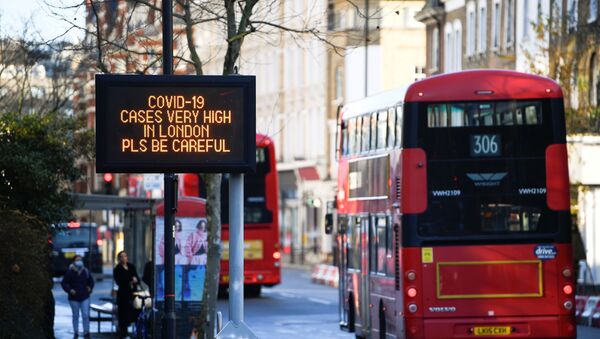 New outbreaks hit have European and Asian countries, forcing them to return to harsh pandemic restrictions. At the same time, mass vaccination campaigns are being launched across the world, with Russia and the UK paving the way, providing vaccines for their citizens.

At midnight tonight, and for the next 72 hours, all flights from the UK will be prohibited from entering Canada. Passengers who arrived today are subject to secondary screening and enhanced measures. More on the actions we’re taking to protect you: https://t.co/UrsE5sTcJT

Canada joined multiple countries across the world in banning flights from the UK after a new mutation of coronavirus was discovered there, The Associated Press reported Sunday, citing sources.

In implementation of directives of HH the Amir regarding the arrival of the first shipment of the COVID-19 vaccine produced by Pfizer and BioNTech on Monday, and the directives of HE Prime Minister and Minister of Interior , MOPH issued approval and emergency use of the vaccine. pic.twitter.com/1DPXaoiTR6

The Saudi government has suspended all international flights for a week due to concerns over the newly-discovered COVID-19 strain, according to state-run news agency SPA.

The report also said, citing an official source at the Ministry of Interior, that entry into the kingdom through land and sea ports will be temporarily suspended for one week as well.

Iran on Sunday announced that it will suspend flights to the United Kingdom for two weeks due to the new COVID-19 strain that had been discovered in the country.

"Due to the new circumstances in the spread of COVID-19 in the United Kingdom, flights between Tehran and destinations in the UK will be suspended for two weeks," IRNA quoted a deputy transport minister Shahram Adamnejad as saying.

The Czech Republic's Health Ministry announced that the country, like many other European nations, would suspend flights from the United Kingdom, after a new mutation of COVID-19 was discovered there.

A tweet reads: "The Czech Republic, like many other European countries, will stop flights from Great Britain from Monday. The relevant measure will be issued tomorrow morning."

The Italian Health Ministry on Sunday said that a patient infected with the new mutated strain of the coronavirus had been found in the country.

"The patient and their partner returned from the United Kingdom several days ago, landing in Rome's Fiumicino airport. They are now isolated and have observed, together with family and close contacts, all procedures proscribed by the health authorities," the ministry said in a press release.

According to the communication, the genome of the UK coronavirus strain has been established by experts of the Celio military hospital in Rome.

MOSCOW (Sputnik) - France has joined the rank of countries which have suspended the traffic with the United Kingdom in the wake of the discovery of a new, more infectious coronavirus strain there, French Prime Minister Jean Castex said on Sunday.
"Considering the new health risks and pending their assessment, all arrivals from the United Kingdom to France are suspended from midnight [23:00 GMT] for 48 hours for all transport means," Castex said on Twitter.

According to the French prime minister, Paris will use the 2-day pause to clarify the health situation in the UK and coordinate a common response strategy with EU member states.

MOSCOW, (Sputnik) - Russia's flagship carrier Aeroflot told Sputnik on Sunday it had no information on possible suspension of air traffic with the United Kingdom in the wake of the discovery of a new, more infectious coronavirus strain there.

Throughout the day, EU countries began unilaterally closing borders with the UK in a bid to prevent the import of the new strain, which is believed to transmit 70-percent faster than the original coronavirus.

"Decisions to suspend or resume the air traffic are in the remit of the government's COVID-19 response center. We have no information about any such decision at this point," Aeroflot spokesman Mikhail Demin said.

Earlier in the day, Russia's COVID-19 response center said it was monitoring the situation in the UK.

The Netherlands already banned flights from the UK, and Germany will do so starting at midnight. Belgium and Italy will reportedly shut down the border shortly, too, while the Austrian authorities are considering halting the flights to and from not only the UK but also South Africa, where the new strain was detected as well.

BERLIN, (Sputnik) - German Healthcare Minister Jens Spahn confirmed on Sunday that Germany was suspending the UK-bound flights starting from midnight, and introducing restrictions for South African flights on Monday due to the mutated COVID-19 strain discovered in both countries.

According to Spahn, the new coronavirus variant discovered in the United Kingdom and South Africa is an expected turn of events, however, "the rapid spread [of the virus], which is suspected of this mutation, changes a lot."

"Therefore, it is important to stop Germany's and continental Europe's air traffic [with the United Kingdom]," the minister said on air the ARD broadcaster.

Spahn added that so far there was little information and the authorities needed to be vigilant.

"Therefore, as a result of cooperation with the Department of Transport, all planes from the UK have been canceled starting from midnight. Tomorrow we will publish a federal government decree restricting entries from the UK and South Africa, where there is a similar mutation of the coronavirus," the minister noted.

MADRID, (Sputnik) - The Spanish government has called on the European Union to agree a common strategy of response to the mutation of SARS-CoV-2, the discovery of which in the United Kingdom prompted many EU countries to shut the borders with the former fellow member state.

Madrid has sent the request to European Commission President Ursula von der Leyen and European Council President Charles Michel, according to a press release by the Spanish government.

"The goal is to protect the rights of EU citizens in a coordinated manner, avoiding unilateralism. The Spanish government expects a prompt reply from the European institutions, but warns that in the case of its absence we will be acting in the interest and for the protection of rights of Spanish citizens," the Spanish government said.

ATHENS, (Sputnik) - Greece has introduced a seven-day quarantine for all passengers arriving from the United Kingdom as a preventive measure against the fast-spreading COVID-19 variant recently discovered in parts of the UK, the Greek Secretary General for Civil Protection said on Sunday.

"With regard to all arrivals from the United Kingdom, it is announced that starting from 6 a. m. [04:00 GMT] on Monday, December 21, the requirement of seven-day home isolation comes into force instead of the three-day [isolation] that applies to arrivals from every other country," the authority said in a statement.

It added that all travelers were still required to have a negative polymerase chain reaction (PCR) test submitted no more than 72 hours before arrival.

A number of European nations, including the Netherlands, Belgium, Austria and Italy, have already decided to introduce a ban on UK arrivals.

Earlier this week, the UK health authorities detected a new mutated strain of the coronavirus that transmits faster and accounts for over half of all recorded cases in southern England and other affected areas.

BRUSSELS, (Sputnik) - The European Council on Sunday convened a meeting of representatives of the EU member states to discuss the situation with a mutated COVID-19 strain recently discovered in the United Kingdom and related measures, a source at the EU government institutions said.

The source told reporters that European Council President Charles Michel had convened the meeting to exchange information on the latest developments linked to the new rapidly-spreading COVID-19 variant.

Across Europe, where transmission is intense and widespread, countries need to redouble their control and prevention approaches", a spokeswoman for WHO Europe said.

"The UK has issued an alert on a new form of COVID-19, which could possibly be a virus mutation. As a government we have a duty to protect Italians, for this reason, after having warned the UK Government, the Italian Health Ministry is about to sign the decree suspending flights to the United Kingdom", Di Maio wrote on Facebook.

Belgian PM Alexander De Croo has announced a suspension order for 24 hours starting at midnight "out of precaution". "There are a great many questions about this new mutation and if it is not already on the mainland", he said.

Answering a question from Times radio whether the government would support people who cancelled their travel plans, Hancock said: "That is something that the Treasury (finance ministry) and the Department for Transport are looking at, because we understand the point that people are making".

When asked, whether a national lockdown was inevitable, Hancock told the BBC: "Not necessarily, one of the reasons we brought in the strict travel movements in Tier 4 ... is to try to stop this new variant from spreading".

"If you are not an [Australian Capital Territory ] ACT resident and have been in greater Sydney...our message is simple: do not travel to the ACT", an official statement read.

MOSCOW (Sputnik) - Russia has registered 28,948 new positive tests for COVID-19 over the past 24 hours, a slight increase from the 28,209 new cases confirmed one day ago, the federal response centre said on Sunday, adding that the country's case total has topped 2.84 million.

MOSCOW (Sputnik) - US tech giant Apple has temporarily closed all of its 53 stores in the state of California and more than a dozen of its outlets in the UK capital, London, amid a continued surge in new coronavirus disease cases in both areas, according to US media outlets.

"Due to current Covid-19 conditions in some of the communities we serve, we are temporarily closing stores in these areas", an Apple representative told the CNBC broadcaster on Saturday.

SEOUL (Sputnik) - South Korea has registered a record-high number of new coronavirus cases confirmed in the past 24 hours, according to the Korea Disease Control and Prevention Agency (KDCA).

The number of reported new cases stands at 1,097, with 1,072 being local, KDCA said. The total number of confirmed coronavirus cases in South Korea stands at 49,665.