Fifth of All American Prisoners Are Infected With COVID-19, Study Suggests 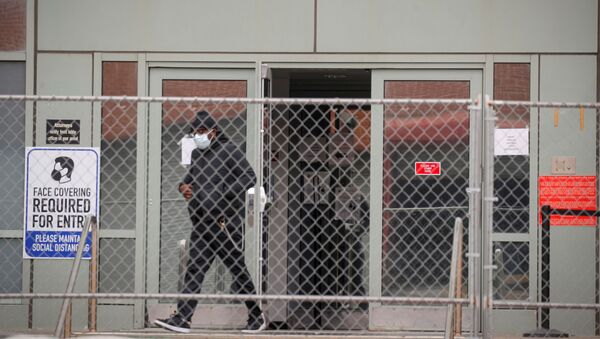 © REUTERS / BRENDAN MCDERMID
Subscribe
International
India
Africa
Alexandra Kashirina
All materialsWrite to the author
The US has the world's highest COVID-19 rates, according to Johns Hopkins University data tracking. Over 194,000 new coronavirus cases have been reported in the last 24 hours alone, along with at least 2,628 deaths. Despite that a universal vaccination began in the US on Monday, prospects for American prisoners are not encouraging.

About 20 percent of all US prison inmates have been infected with the coronavirus, as research from The Associated Press and the Marshall Project shows. According to data daily collated from March, over 275,000 prisoners throughout the country have contracted the virus since the COVID-19 outbreak.

This week, the number of positive tests reached the highest point since the spring, surpassing April and August peaks.

Homer Venters, a former chief medical officer at the notorious Rikers Island jail in New York City, claimed that the numbers are a significant understatement, as most jails doesn’t provide widespread regular testing. He noted that many prisoners don’t receive appropriate medical care.

New: 1 in 5 prisoners have been infected with COVID-19.

■ That's four times the rate of the general population.

■ In some states, half or even 3 out of every 5 prisoners have tested positive.

■ It didn’t have to be this way. https://t.co/eVAAFMJfAx

Infection rates in prisons are four times higher than in the general population, as the possibility of social distancing is nonexistent behind bars, where residential dormitories and cafeterias are typically overcrowded and poorly ventilated.

“I still encounter prisons and jails where, when people get sick, not only are they not tested but they don’t receive care. So they get much sicker than need be,” Venters said, now senior fellow with Community Oriented Correctional Health Services.

He pointed out that “there’s no way” that prisoners are going to get the vaccine before members of a vulnerable population and “people who haven’t committed any crime”.

At the moment, in seven states, prisoners are included in priority groups, along with others living in crowded settings such as nursing homes and long-term care facilities. Another 19 states have placed prisoners in the second phase of vaccine introduction while vaccination plan in other states, according to Marshall Project found, does not mention prisoners or corrections staff.