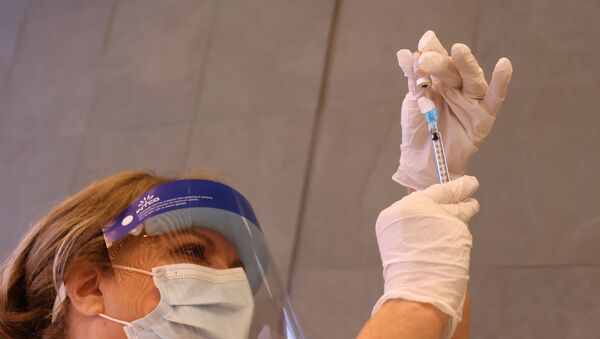 © REUTERS / LUCY NICHOLSON
Subscribe
Daria Bedenko
All materialsWrite to the author
In December, the US Food and Drug Administration issued emergency use authorisation for two vaccines, Moderna and Pfizer-BioNTech. The country remains the nation worst affected in the coronavirus pandemic, having registered over 17 million cases and at least 315,000 deaths.

The US Centers for Disease Control and Prevention (CDC) confirmed in a Saturday statement that it has learned of reports on a handful of people experiencing "severe allergic reactions", also known as "anaphylaxis", after receiving a shot of the coronavirus vaccine.

The agency issued new guidelines, outlining that people with a history of severe allergic reactions to things not related to vaccines - such as food, animals, environmental or latex - may still get vaccinated.

"If you have ever had a severe allergic reaction to any ingredient in a COVID-19 vaccine, CDC recommends that you should not get that specific vaccine", CDC said in the new guidelines. "If you have had a severe allergic reaction to other vaccines or injectable therapies, you should ask your doctor if you should get a COVID-19 vaccine. Your doctor will help you decide if it is safe for you to get vaccinated."

CDC also noted that those who experienced an allergic reaction to the first shot of the vaccine, should not get the second.

According to Fox News, there have been six allergic reactions after an inoculation among 272,000 shots given to date. The reactions reportedly occurred within the recommended observation window, which is half an hour for those with a history of severe allergic reactions and 15 minutes for others.

The CDC outlined that all people who receive the vaccine be physically monitored at the site.

In December, two vaccines were approved by the US Food and Drug Administration (FDA) for emergency use - Moderna and Pfizer-BioNTech. Several prominent political figures, including Vice President Mike Pence, Speaker of the House Nancy Pelosi and Senate Majority Leader Mitch McConnell have been inoculated publicly, while US President-elect Joe Biden announced he would receive a shot on Monday.

The first wave of vaccinations began in the US last week, with the use of the Pfizer BioNTech vaccine.