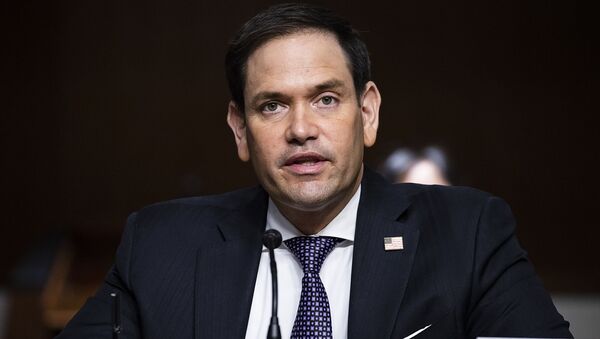 Tim Korso
All materialsWrite to the author
The Florida Republican senator's claims come amid conflicting assessments of the source of the cyber intrusion sounded by the US president and his current secretary of state. While the former blamed China, the latter suggested that it was "pretty clear" that Moscow had a hand in it.

A Republican US senator from Florida, Marco Rubio, has called on the US government to give "proportional but significant" response to whoever was responsible for the reported massive cyberattacks on the government, including against the Pentagon and the FBI. In his 18 December tweets, Rubio cautiously suggested that Russia might have been behind the hacks, but in his latest tweets, the senator has gone all-in that "Russia did it", although he presents zero evidence to support his strident claims.

"Increasingly clear that Russian intelligence conducted the gravest cyber intrusion in our history. The process of determining its extent and assessing the damage is underway. Remediation will take time and significant resources. Our response must be proportional but significant", Rubio stated.

The senator argued that this time retaliation must not be limited to another round of sanctions, but then failed to elaborate what more significant measure could be taken.

The methods used to carry out the cyberhack are consistent with Russian cyber operations.

But it’s crucial we have complete certainty about who is behind this.

We can’t afford to be wrong on attribution, because America must retaliate, and not just with sanctions.

So Was It China or Russia?

While Rubio seemed confident in where to place the blame for the hacks, those responsible for the US government's computer system incursions - if there actually have been any - have not yet been revealed, as the Trump administration apparently has not yet agreed on its culprit of choice. US Secretary of Mike Pompeo claimed that he could "say pretty clearly" that the Kremlin participated in the attack, adding that Washington detected "significant effort" to use a piece of "third-party software" to infect government computers, without offering into details.

Moscow strongly rejected the White House accusations, pointing out that, as usual, the Trump administration has failed to present any proof to back up its claims.

US President Donald Trump, however, tweeted on 19 December, not long before Rubio's tweet, that China may be behind the hacker attack on government computer networks. Trump also criticized US mainstream media for "chanting" the hacking accusations against Russia.