Oleg Burunov
All materialsWrite to the author
On Wednesday, a group of Republicans in the US Congress claimed in a letter that Representative Eric Swalwell (D-CA.) "withheld information for five years from the House Intelligence Committee about an ongoing Chinese espionage operation targeted at him and his own colleagues".

Earlier this week, the news outlet Axios reported that a Chinese national, Fang Fang, aka Christine Fang, used to work for Beijing intelligence during her residence in the US, collecting useful information for influencing rising American politicians. 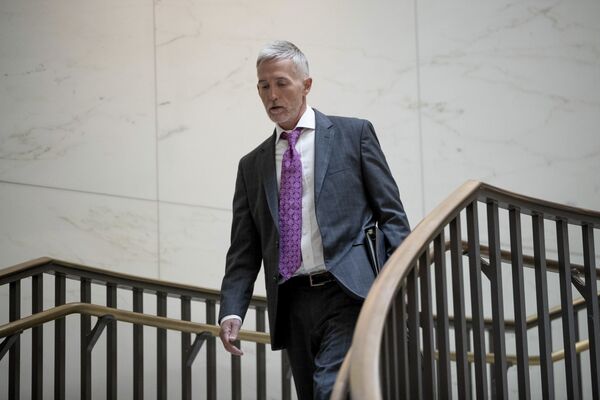 "There are 230 [House] Democrats, and you mean to tell me she [Fang Fang] cannot find a single one that didn't date a Chinese spy?", Gowdy said, expressing frustration over Pelosi's handling of the issue because "we [Republicans] listened to him [Swalwell] for years".

Referring to Swalwell, Gowdy, now a Fox News contributor, wondered how "the guy" was "not smart enough to know he's being played by a Chinese spy" for at least four years.

"That's the best Nancy Pelosi could do? At 230 members, the best you can come up with is a former city councilman in California who's not smart enough to know when a woman is expressing interest in you, [whether] she's a spy?", the ex-House Oversight Committee Chairman noted.

When asked about whether he believes Swalwell's claim that he didn't do anything wrong, Gowdy remained downbeat, saying that "unfortunately" he "knows" Swalwell.

"This is the same guy that ran for president so he's not known for his self-awareness. I need to hear from the FBI and the director of national intelligence. What did you all have? I mean, you went to a sitting member of Congress [and] said, 'Look, you probably should not be having any new faces in your life'. What did they tell him? And I don't think Swalwell has denied having a relationship with her [Fang Fang]. He said it was classified. I'll be damned if I know what that means: All you've got to say is 'I didn't sleep with her', Eric. That's all you got to say", Gowdy said.

The interview comes after a group of 17 Republicans in the US Congress sent a letter to US Speaker of the House Nancy Pelosi, asking her to "immediately remove" Swalwell from the House Permanent Select Committee on Intelligence.

The letter was issued in the wake of a recent Fox News report that Swalwell was "among the most significant targets" of a Chinese-born, then-California student Fang Fang, who is suspected of espionage.

"Because of Rep. Swalwell's position on the House Permanent Select Committee on Intelligence, his close interactions with Chinese intelligence services, however unintentional they may be, are an unacceptable national security risk", the document read.

The GOP lawmakers noted that in 2017, Pelosi called ex-Attorney General Jeff Sessions "not fit to serve" and urged him to resign, amid reports at the time that he failed to disclose to Congress details of meetings with then-Russian Ambassador Sergey Kislyak.

"Rep. Swalwell withheld information for five years from the House Intelligence Committee about an ongoing Chinese espionage operation targeted at him and his own colleagues. Obviously, Rep. Swalwell's interactions with a Chinese spy were more dangerous and unusual than AG Session's meetings with a Russian diplomat", the letter pointed out.

The Republicans argued that in 2019, during the so-called Trump-Russia investigation, Swalwell used his position on the intel committee to attack "President Donald Trump's unproven ties to Russia" while refusing to explain his own ties to an alleged Chinese spy.

'The Deep Dive': What's Behind the House Intel Report on US Anti-China Spying Capabilities?
In April 2019, then-Special Counsel Robert Mueller's probe found that there was no collusion between Trump and Russia ahead of the 2016 US presidential election.

According to the Axios report, Fang Fang was not suspected of accessing any classified information, although she was for a time placed under an FBI probe and surveillance, and soon left the country.

In a statement after the report's publication, Swalwell denied any wrongdoing, stating that the FBI gave him a comprehensive briefing on Fang causing him to immediately cut all ties to her.