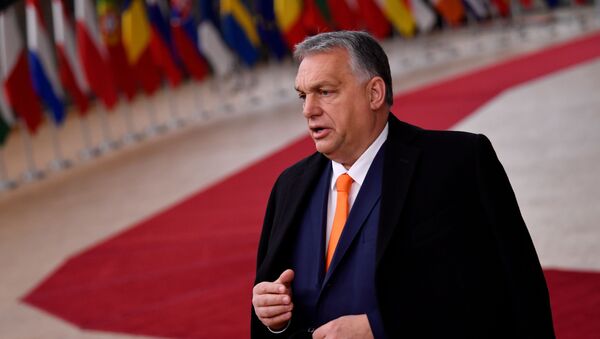 James Tweedie
All materialsWrite to the author
As well as claiming eastern European leaders were sowing divisions with the bloc, Othmar Karas accused the UK government of 'cherry-picking' in post-Brexit trade negotiations and 'duplicity' towards its own citizens.

An Austrian MEP has accused Hungary and Poland of harbouring political "Brexit suspects" who sow divisions within the European Union (EU).

Othmar Karas, a member of the conservative European People's Party (EPP) bloc, made the accusation in a forthright speech to the European Parliament on Friday in which he also attacked the UK for daring to leave the EU.

"There are many Brexit suspects amongst us in Hungary and Poland and other member states," Karas added. "Those who break shared laws and play off the interests of their citizens are not contributing to securing a common future."

The two former Eastern Bloc nations wrung concessions from Brussels earlier this month when they forced the removal of "rule of law" clauses from the EU's 2021-27 budget bill by threatening to veto the legislation. That prompted Hungarian-born US billionaire George Soros - a major funder of political NGOs - to accuse the EU of "surrender".

Both countries have come under attack from EU apparatchiks over their programmes of judicial reform, and have also refused to accept the bloc's quotas for accepting minimum numbers of asylum seekers during the Mediterranean migrant crisis.

While the Polish and Hungarian governments have not overtly threatened to follow the UK out of the door, several EU countries have significant Eurosceptic movements and parties - even core member states like Italy, the Netherlands, France and Germany.

Karas is a member of the Austrian People's Party (ÖVP) of Chancellor Sebastian Kurz - whose government takes a similar anti-immigration stance to Hungary and Poland, and has adopted a so-called "burqa ban" on face coverings in public that is widely seen as targeting Muslim women.

The MEP also laid into British Prime Minister Boris Johnson's government - as the clock ticked down to a no-deal Brexit - and attempted to drive a wedge between the Brexiteer PM and the Leave-voting majority.

"Withdrawals do not solve problems," Karas said. "None of the Brexit promises can be delivered except for withdrawal, and that is a defeat."

Top Tory Brexiteer Warns Government Against 'Bouncing' MPs Into Last-Minute Trade Deal
Addressing the ongoing UK-EU talks towards a post-Brexit trade agreement, Karas insisted: "We are are trying to defend the rights and values of the European Union" by demanding Britain follow Brussels' rules even after the transition period ends on December 31. "We are defending the rights of the citizens, and we are working to ensure fairness," he claimed. "That is the basis of the negotiations."

Karas attacked Johnson for seeking a free-trade agreement with no strings attached in the form of 'regulatory alignment' and continued European rights to the lion's share of the catch in the UK's vast fishing waters. "On the other side of the Channel, unfortunately, what has been asserted is a form of tactics made up of cherry-picking and arrogance and duplicity to their own citizens," he said.

000000
Popular comments
karas is obviously a hardcore europhile MEP, as a result you cannot expect any reasonable discourse from this type of person. They parrot brussels eu policy, whatever that may be. Controversy has already surrounded this individual for collecting hundreds of euros per day while not even bothering to appear in the eu "parliament".

centr
20 December 2020, 03:48 GMT3
000000
Bravo to Poland and Hungary, In Maastricht (Netherlands), were the foundation of the Eu was presented. With big words there told the sheeple every single country small or big will be a sovereign country !!! the majority of sheeple did believe it ... Except the leader's witch were discussing in Maastricht the same show from the past (Viena was dancing in 18 . .) Today the Us, Soros, Germany and France are ruling the Eu !!! So we should say thank you to President Viktor Orban and President Andrzej Duda!!!