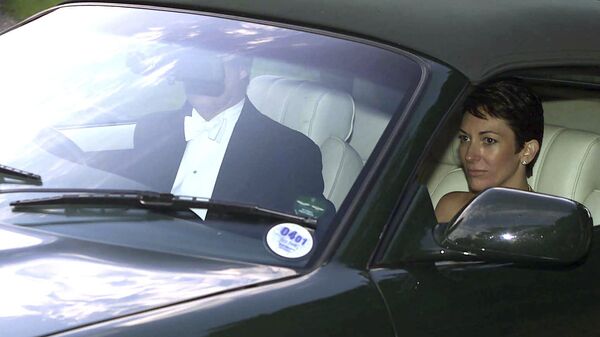 © AP Photo / Chris Ison
Subscribe
International
India
Africa
Gaby Arancibia
All materialsWrite to the author
Ghislaine Maxwell, a former associate of convicted sex offender Jeffrey Epstein, has been accused of playing a pivotal role in the American financier’s exploitation and abuse of young girls. The so-called “madam” has been in the custody of US law enforcement since she was apprehended in July at a New Hampshire home.

US prosecutors noted in a Friday legal filing to the US District Court of Manhattan that due to the severity of Maxwell’s alleged crimes, she should by no means be allowed to leave to confines of the Brooklyn Metropolitan Detention Center in New York after the detainee filed a second bail request.

In the filing, prosecutors also noted that the charges against the British socialite are “incredibly serious,” and that as the evidence continues to stack up against her, there are no conditions that can ensure she would not flee if released from the Brooklyn center.

“The offense conduct outlined in the indictment remains incredibly serious, the evidence against the defendant remains strong, and the defendant continues to have extensive financial resources and foreign ties, as well as the demonstrated ability to live in hiding for the long term,” reads the filing.

“The defendant poses an extreme flight risk, no condition or combination of conditions can reasonably ensure her appearance in this District, and the Court should not alter its prior finding to that effect.”

The latest filing in the case comes after Maxwell, who has remained adamant that she has not committed any crimes or been involved in criminal activity linked to Epstein, submitted a new bail request that offered $28.5 million in exchange for her release.

Maxwell’s bail request stated that she was being kept under “oppressive conditions” that “jeopardize her physical health and psychological wellbeing.” Additionally, the detainee proposed being monitored with an electronic device and having armed guards stationed at her New York City residence.

Prosecutors further challenged the request by outlining that neither an electronic device nor guards would be sufficient, as Maxwell has the capacity to evade detection easily due to foreign connections and her extensive wealth.

As for the “oppressive conditions” that Maxwell has alleged, officials explained that she is being allowed out of her isolation cell for a period of 13 hours every day, and that she has a personal shower, access to two computers and her own phone and TV.

“Those conditions set her far apart from general population inmates, not to mention other inmates in protective custody,” the filing reads, before highlighting that Maxwell is checked on daily by psychology and medical staff.

Addressing Maxwell’s claims that ties to her unidentified husband would keep her from skipping out on the legal proceedings, prosecutors noted that the argument was “plainly inconsistent,” since she had previously stated that she was in the process of getting divorced.

Prosecutors have labeled the latest request a “repackaging” of Maxwell’s previously presented arguments made in a July bail request that proposed $5 million for her temporary release. The July offer was denied by Judge Alison Nathan who acknowledged that the defendant poses too much of a flight risk to be released from custody. Nathan will also decide whether to approve or deny the latest bail submission.

Maxwell has been charged with multiple criminal counts, including enticing a minor to travel to engage in criminal sexual activity and knowingly transporting a minor with the intent to engage in sex, among other offenses. Maxwell’s trial is slated to start in 2021. If convicted, the 58-year-old detainee faces up to 35 years in prison.