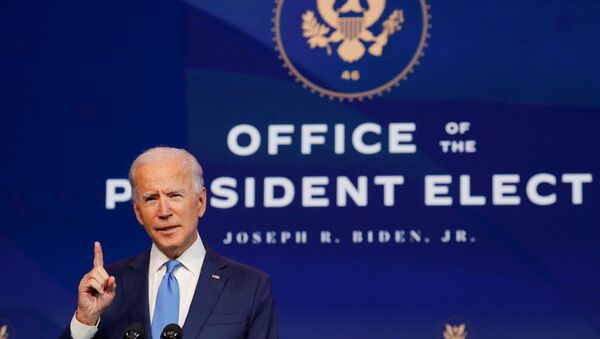 © REUTERS / MIKE SEGAR
Subscribe
International
India
Africa
Daria Bedenko
All materialsWrite to the author
The announced team will advance a Biden agenda of "leading the world to confront the climate crisis", as the Democrat has outlined his commitment to address climate change issues in his policy, pledging to create "good-paying union jobs", build "resilient communities", and make "historic investments in environmental justice".

“This brilliant, tested, trailblazing team will be ready on day one to confront the existential threat of climate change with a unified national response rooted in science and equity", Biden said, commenting on the announcement. "They share my belief that we have no time to waste to confront the climate crisis, protect our air and drinking water, and deliver justice to communities that have long shouldered the burdens of environmental harms."

Vice President-elect Kamala Harris named the climate crisis as "a grave and growing threat to the American people and the planet we all share", expressing confidence that the newly-announced team would help make "the most ambitious climate plans in history" a reality.

The nominations were welcomed by many as "historic", with former Democratic presidential candidate Hillary Clinton among the first to praise Biden's choices.

In particular, she marked the appointment of Haaland as "a proud, historic moment for our country".

And @DebHaalandNM’s nomination to lead Interior—the first Native person to join the Cabinet—is a proud, historic moment for our country.

Secretary of the Interior

Deb Haaland has been chosen by Biden as the incoming Secretary of Interior. ​

As chairwoman of the Laguna Development Corporation Board of Directors, she successfully advocated for the corporation to implement eco-friendly business practices.

After the announcement, she took to Twitter to express her gratitude for the appointment and readiness to serve.

"A voice like mine has never been a Cabinet secretary or at the head of the Department of Interior", Haaland, who is Native American, tweeted. "Growing up in my mother’s Pueblo household made me fierce. I’ll be fierce for all of us, our planet, and all of our protected land."

A voice like mine has never been a Cabinet secretary or at the head of the Department of Interior.

Growing up in my mother’s Pueblo household made me fierce. I’ll be fierce for all of us, our planet, and all of our protected land.

I am honored and ready to serve.

‘Titanic Hit the Iceberg’: Climate Threat Unavoidable Despite Biden’s Plan to Rejoin Paris Accord
The first woman to become the governor of Michigan, she served in position from 2003 to 2011. Granholm was also a member of the transition team of former US President Barack Obama, and he reportedly considered her for possible appointment to the US Supreme Court.

She also tweeted a statement regarding her nomination, saying that she is grateful "for the support and the collective commitment to clean energy and a healthy planet."

"I’m honored that President-elect @joeBiden has placed his faith in me as his Energy Secretary nominee. We have an opportunity to build back better while creating millions of jobs — we can do it!", she tweeted.

I have been seeing so many nice comments on this feed over the past few days, and while I can’t respond to every one please know how grateful I am for the support and the collective commitment to clean energy and a healthy planet. Thank you @JoeBiden!

Michael Regan, chosen by Biden to lead the Environmental Protection Agency, is the head of the North Carolina Department of Environmental Quality.

This will not be his first time working in the EPA, as he was previously part of the EPA during the presidencies of Bill Clinton and George W. Bush, serving as a national program manager responsible for designing programs aimed at reducing pollution and improving energy efficiency and air quality.

Chair of the Council on Environmental Quality

Biden picked Brenda Mallory for this position, a lawyer specializing in environmental law.

Currently, she serves as the Director of Regulatory Policy at the Southern Environmental Law Center.

Mallory was also part of the Obama administration as General Counsel for the White House Council on Environmental Quality.

"I’ve dedicated my career to solving environmental challenges for communities, addressing environmental justice, and tackling the climate crisis head on", Mallory tweeted. "I’m honored to be the incoming administration’s nominee to head the Council on Environmental Quality."

I’ve dedicated my career to solving environmental challenges for communities, addressing environmental justice, and tackling the climate crisis head on. I’m honored to be the incoming administration’s nominee to head the Council on Environmental Quality.

Administrator Gina McCarthy, chosen by the President-elect as an incoming National Climate Advisor, is an environmental health and air quality expert. She also served as the 13th Administrator of the EPA from 2013 to 2017.

In her Twitter, McCarthy shared goals for the future position.

I am honored to lead the first White House Office of Domestic Climate Policy.

My goal is to marshal our entire government, engage every community, harness the forces of science and the values of environmental justice – all to build a healthier and more just world.

​Her future deputy, Ali A. Zaidi, is an American lawyer and policy advisor, who was the New York deputy secretary for energy and environment and held climate policy positions in the Obama administration.

Zaidi took to Twitter to comment on his appointment, saying that he is "profoundly humbled, deeply honored, and so ready to get to work".

We need a whole-of-government approach to take on the climate crisis — in a way that spurs jobs and advances justice. I was floored when President-elect @JoeBiden called. I still am — profoundly humbled, deeply honored, and so ready to get to work!