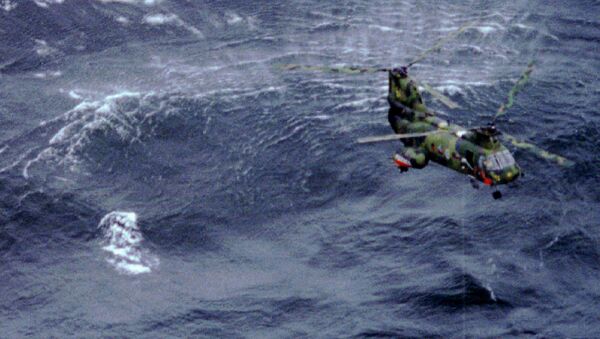 © REUTERS / STR New
Subscribe
International
India
Africa
Gaby Arancibia
All materialsWrite to the author
The MS Estonia sank in the Baltic Sea off Finland on September 28, 1994, after the ship’s bow door locks failed during a storm, prompting the vessel to capsize within moments as hundreds of its passengers were left trapped. The disaster is considered Europe’s second-deadliest peacetime sinking after that of the RMS Titanic.

Officials in Sweden announced their intentions on Friday to allow for a new investigation into the sinking of the MS Estonia after new evidence emerged from a documentary more than 25 years after the disastrous incident.

Sweden’s Home Affairs Minister Mikael Damberg revealed during a news conference that the country’s Accident Investigation Authority, along with counterparts from Finland and Estonia, would be sending divers down to the wreck site to further investigate claims made about damage to the vessel’s hull.

“If there is new information, we need to look into it and clear up any questions,” Damberg said. However, it’s worth noting that no set date was given for when the mentioned dives would be taking place.

The documentary at the center of renewed interest in the wreck came from the Discovery Channel network, and it was released in September to coincide with the wreck’s 26th anniversary. The five-part broadcast provided new underwater footage that showed a previously unrecorded 13-foot gaping hole in the ship’s hull.

After the documentary was aired, Sweden, Finland and Estonia announced that a joint investigation to assess the new finding would be undertaken. An official report in 1997 ultimately concluded that the sinking was caused by a faulty door lock on the vessel’s bow.

John Ahlberk, head of the Swedish Accident Investigation Authority, stressed during the Friday conference that “the purpose [of the new investigation] is to find out what the hole is.” He also stated that preliminary reviews of the footage have not suggested that the official report on the incident was incorrect.

Incidentally, the announcement comes some two months after the Estonian government released a report based on its own investigation that determined the hole was far too small to have caused the ship to sink. At the time, the report noted that the newly discovered evidence did “not seem reasonable” enough to prompt further analysis.

Varying explanations as to why the ship sank have circulated for years, some of which suggest the MS Estonia met its end after the vessel either collided with a submarine or that an explosion occurred within the ship.

Kent Harstedt, a Swedish politician and survivor of the 1994 wreck, previously stated that theories surrounding a possible hole were dismissed by officials ahead of the release of the 1997 report, and in September raised questions about the decision to not include the information in the final report.

The MS Estonia had left Tallinn, Estonia, and was en route to Stockholm, Sweden, when it met with stormy weather conditions in the fall of 1994. The 1997 report notes that the vessel encountered strong winds and waves that measured about 13 feet in height.

A total of 852 people died when the ship sank just 22 nautical miles from Finland’s Uto island. Hundreds drowned after becoming trapped inside the capsized vessel, and dozens of others who managed to escape died of hypothermia before rescue crews arrived at the scene. Only 137 people survived.