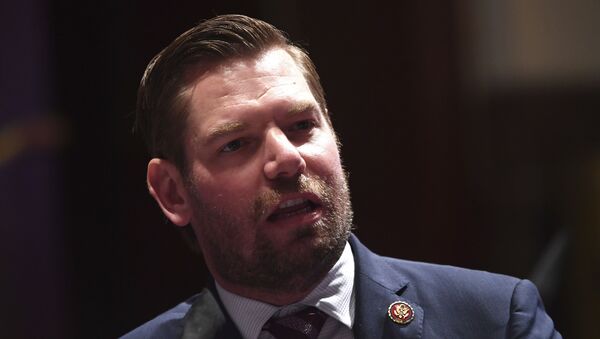 Morgan Artyukhina
All materialsWrite to the author
US Rep. Eric Swalwell (D-CA) has been among the strongest voices accusing Trump administration figures of meeting with alleged Russian spies who were never accused of espionage. Now he finds himself hoist by his own petard, at risk of losing a coveted committee seat over much more serious accusations.

After a closed-door briefing from FBI officials on Friday, House Minority Leader Kevin McCarthy (R-CA) has urged that Swalwell be removed from the House Intelligence Committee. The Democratic legislator is accused of having befriended an alleged Chinese spy, prompting fears he may have leaked important information to her.

"He should not be on Intel," McCarthy told reporters at the US Capitol after the briefing. "I just think there are definitely 200 other Democrats that I know could fill that place."

McCarthy’s statement follows urging by more than a dozen Republican lawmakers to have Swalwell removed from the committee, which receives regular reports on classified information.

House Speaker Nancy Pelosi (D-CA) was also present for the briefing but made no comments to reporters afterward, Fox News noted. She has previously defended Swalwell and his continued presence on the Intelligence Committee.

Swalwell became embroiled in the scandal after it emerged last week that he had been among those an alleged Chinese spy named Fang Fang pursued relationships with between 2011 and 2015. Swalwell says he cut off contact as soon as he became aware she was being investigated by the FBI.

Swalwell joined the House Permanent Select Committee on Intelligence in 2015, after he was elected to a second term. It’s unclear if his time on the committee and his relationship with Fang overlapped at all.