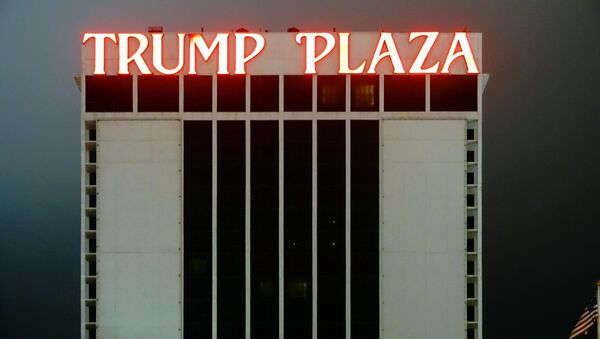 Evan Craighead
All materialsWrite to the author
The bidding war, organized by Bodnar's Auction, is set to go live on January 19, 2021, 10 days before the scheduled demolition of the former casino and just one day before the anticipated inauguration of US President-elect Joe Biden.

Local officials in Atlantic City, New Jersey, are looking raise cash for charity using the infamy of one of its former business owners: US President Donald Trump.

Atlantic City Mayor Marty Small announced this week that the coastal resort city will soon begin accepting bids for the chance to destroy the former Trump Plaza, the building which housed the US president's Atlantic City casino from 1984 to 2014.

“Some of Atlantic City’s iconic moments happened there, but on his way out, Donald Trump openly mocked Atlantic City, saying he made a lot of money and then got out,” Small told the Associated Press. “I wanted to use the demolition of this place to raise money for charity."

The mayor hopes the winning bid for the January 29 demolition will top $1 million.

The Bodnar's Auction sale, which goes live at 1:00 p.m. EST on January 19, 2021, offers potential bidders "a once in a lifetime opportunity to bid on the right to push the button to implode Trump Plaza."

"For several years it has been sitting empty and now is the time to end an era and replace it with something new. We are selling the experience to push the button to implode Trump Plaza," the auction page details. "This will be done remotely and can be done anywhere in the world as well as close to the Plaza as we can safely get you there!"

All proceeds from the auction will reportedly benefit the Boys & Girls Club of Atlantic City.

While the building presently retains Trump's name, the US president only owned 10% of Trump Entertainment Resorts - which included the Trump Taj Mahal Casino Resort, Trump Plaza Hotel and Casino and Trump Marina Hotel Casino, all in Atlantic City - after the company declared bankruptcy in 2009.

The company would later file for Chapter 11 protection in 2014 before falling into the hands of owner Carl Icahn, the billionaire businessman and Indian Creek Island resident who may become the new neighbor of Jared Kushner and Ivanka Trump.

Small told the AP that Icahn is looking forward to the post-demolition possibilities of the Atlantic City plot.

“Not often does inner-city oceanfront land open up,” the mayor explained. “We have one chance to get this right.”