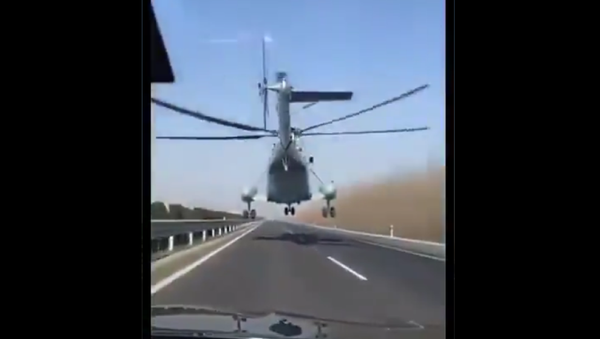 Morgan Artyukhina
All materialsWrite to the author
China’s Z-8 helicopter, derived from the French Super Frelon, has long been a staple of the Chinese armed forces, which is still finding new uses for the powerful heavy-lifter. However, using such a large aircraft for stunts was probably previously unknown.

Drivers along a rural highway in China got the shock of their lives recently when a People’s Liberation Army (PLA) Z-8 helicopter appeared overhead.

In the video, which originated on Sina Weibo before going viral across social media, a car passenger films two different scenes. In the first, a Changhe Z-8 heavy transport helicopter zips toward the car, passing at a close but safe distance overhead.

Then, the video picks back up at some time after, with the Z-8 so close that at first it’s not entirely clear what the viewer is looking at. However, as it pulls ahead of the car, its massive body becomes more recognizable.

​It’s then the chopper does something truly shocking: the daredevil pilot drops even lower, so that the helicopter’s wheels are just inches above the pavement, and he matches the speed of traffic. Meanwhile, the people inside the car scream in amazement and disbelief.

It’s impossible to know exactly what’s going on here. Why a PLA pilot would perform such a dangerous maneuver without significant planning is unclear, but that also means this could be part of a promotional stunt of some kind. Also, the road loses a lane between the first and second videos, meaning these could either be two completely different incidents, or they happened some time apart.

According to The War Zone, the helicopter’s lack of visible identifying markers suggests it comes from the PLA Navy Marine Corps, a fast-growing branch of the armed forces that only recently received helicopters. It’s possible that Chinese marines simply want to prove they can hot-dog as much as US Marine chopper pilots can.