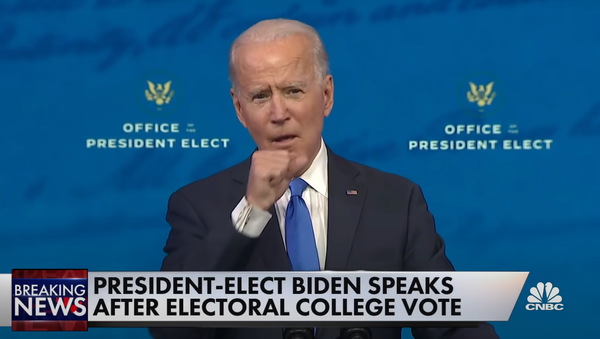 Evgeny Mikhaylov
All materialsWrite to the author
Joe Biden is announcing his latest picks as the Electoral College confirmed the results of the 3 November presidential election. The former vice president of the United States received more than the 270 Electoral College votes needed to become president.

President-elect Joe Biden has accidentally mixed up the name of Pete Buttigieg's husband, calling him Kristen, instead of Chasten. The gaffe occurred during an important moment, as Biden was announcing that Buttigieg, the ex-South Bend Mayor and his rival during the Democratic primaries, will be transportation secretary in his administration.

President-elect Joe Biden: "Jill and I have always enjoyed seeing Pete and Kristen. Chasten, I should say." pic.twitter.com/Fz0mFzYzXy

​"Jill and I have always enjoyed seeing Pete and Kristen – or, Chasten, I should say – together on the (campaign) trail", Biden said. "Chasten has become a close friend of Jill's and mine".

The lapse comes just a day after Biden mispronounced the name of the Democratic candidate for the US Senate, John Ossoff, calling him Orsoff during a rally in Georgia ahead of the runoffs that will decide the fate of the majority in the upper chamber of Congress.

This little mistake is another addition to a collection of gaffes that Biden has made over the last year. He previously said "200 million Americans" have died from COVID-19, stated that he joined the senate "180 years ago", and mixed up the names of his team members several times.