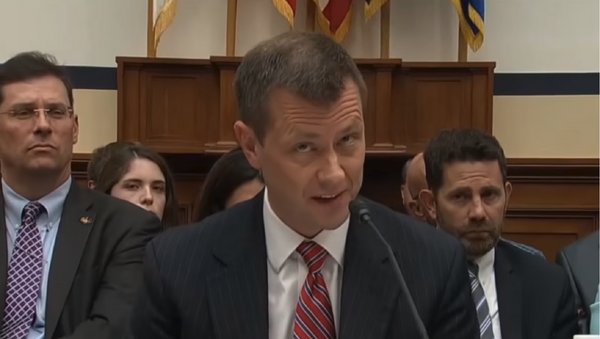 James Tweedie
All materialsWrite to the author
Declassified internal messages from sacked FBI counterintelligence chief Peter Strzok indicate that he and colleagues were acting on information from former British spy Christopher Steele's lurid dossier on Donald Trump when they sought to pressure his campaign aide to testify that colleagues had colluded with Moscow to steal the 2016 election.

The FBI knew a former British spy was feeding claims from a 'sexed-up dossier' on US President Donald Trump to media but refused to act, declassified files reveal.

Messages to and from former FBI counterintelligence chief Peter Strzok's internal FBI 'Lync' system account show the agency was aware that ex-MI6 agent Christopher Steele was the source behind the smear stories against Trump before his inauguration but failed to report his activities to the Foreign Intelligence Surveillance Court, the relevant authority.

They also show Strzok thought the dossier was meant to "influence" US politics as much as inform, but the agency may still have used Steele, an informant for them since 2014, as a source for leads in the investigation.

The redacted messages, seen by the Daily Caller before publication, were released by Senate Republicans on Thursday, after being declassified by Attorney-General William Barr last week - ahead of the announcement of his resignation, effective on December 23.

The messages show how Strzok and his colleagues discussed the Crossfire Hurricane probe into claims Trump colluded with the Russian government to steal the 2016 presidential election from Democratic Party candidate Hillary Clinton. He was kept constantly updated on FBI interviews with Trump campaign advisers Carter Page and George Papaodpoulos, the main targets of the probe.

One message indicates that Strzok saw Steele's hand behind a Yahoo News story in a July 2016 alleging that Page had  secretly met the two Russian officials in Moscow.

“Looking at the Yahoo article, I would definitely say at a minimum Steele’s reports should be viewed as intended to influence as well as to inform,” he wrote in September 2016

The FBI cut Steele out of the loop after he leaked more material to website Mother Jones for an article published on 31 October, 2016.

The messages show Strzok and others at the agency had advance knowledge of CNN's 10 January, 2017, story about then-FBI director James Comey's January 6 briefing to Trump on the dossier, in which Comey warned the president-elect that Russia had a sex tape that it could use to blackmail him.

In a January 9 exchange with a fellow agent named Page, possibly his mistress, Lisa Page, Strzok wrote of "nervousness" over the report's revelation that Comey had received a copy of the dossier from late senator John McCain - and that veteran Washington Post reporter Carl Bernstein, who broke the 1973 Watergate scandal with colleague Bob Woodward, was now working on the story, taking over from Jim Sciutto.

“Awesome,” Page replied. “Let Carl run it down then.” The CNN report on the dossier led to gossip site BuzzFeed publishing it in its entirety.

Comey had in fact received the Trump dossier in December 2016, only briefing the president four weeks later. Steele reportedly charged around $175,000 to look at his dossier, which reports claim he 'sexed up' on demand.

Other messages from Strzok find him speculating that Trump campaign aide George Papadopoulos may have been willing to implicate Carter Page and Paul Manafort in their collusion with Russia as part of an impunity deal. He gave reasons for that assumption, but Steele coincidentally claimed in his dossier that Manafort had directed Page into a “well-developed conspiracy of cooperation” with Moscow.

“I think our anticipation is he has visibility into a conversation about the Russian offer of help (and I’d be willing to bet if he talks, he fingers Page or Manafort),” Stzrok told deputy assistant director Jennifer Boone.

Stzrok wrote to supervisory special agent Jonathan Moffa to ask about Papadopoulos' "demeanour" during interviews, stressing: “If he’s willing to work with us against either of them, I’ll reconsider.”

Declassified Mueller Docs Reveal DoJ Couldn’t Prove WikiLeaks Got DNC Emails From Russia
Strzok originally hit the headlines in late 2017 after cell phone text message exchanges with Lisa Page between 2015 and 2016 came to light, revealing their mutual contempt for Trump and their desire to stop the GOP candidate from taking office. He was fired by Trump in August 2018, but successfully sued the FBI and Justice department in 2019 for wrongful dismissal, claiming his texts were protected speech under the First Amendment of the US Constitution. The DOJ inspector-general ruled in December 2019 that he was not biased in his investigation of Trump.

As head of counterintelligence at the FBI, Stzrok oversaw the probe into Hillary Clinton's use of a private home server computer to receive classified emails from the US State Department while serving as Secretary of State under President Barack Obama. The investigation ended with no charges against Clinton. Strzok later served as an assistant to US Special Counsel Robert Mueller in the hearings into the Trump-Russia claims, which ultimately found no direct evidence of collusion.