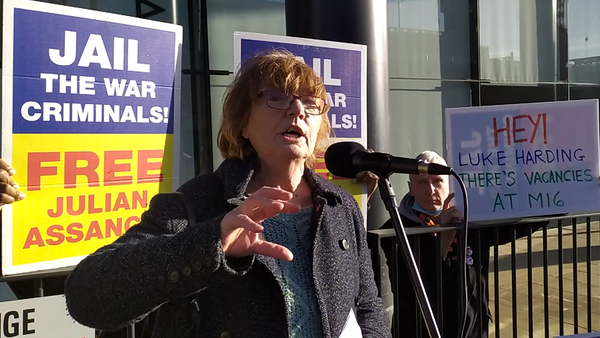 Mohamed Elmaazi
All materialsWrite to the author
The Guardian newspaper has come under fire for its role in pushing narratives about WikiLeaks publisher Julian Assange that his supporters say distort the truth and has contributed to his current plight.

Around two dozen supporters of Julian Assange formed a picket outside of the headquarters of The Guardian newspaper on 17 December 2020.

The demonstrators attended to call out what they described as “lies” and “false stories” printed by The Guardian regarding the WikiLeaks founder, who is currently fighting an extradition request to face espionage related charges in the United States. 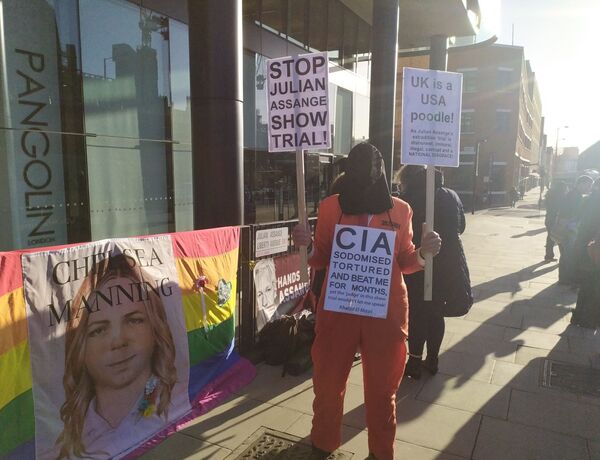 A protester stands outside The Guardian HQ holding banners whilst dressed in a Guantanamo Bay style orange jump suit and black hood over his head
© Photo : Mohamed Elmaazi

“Perhaps of the wider layers of the British population took their democratic rights seriously there would be tens and hundreds of thousands on the streets to defend Julian Assange and get him out of Belmarsh”, Maxine Walker from the Committee to Defend Julian Assange (JADC) told the crowd.

Ms Walker attributed a substantial “degree of blame” attached to The Guardian editors and journalists for their role in constructing what she described as a false narrative around the WikiLeaks co-founder.

“In that building, they all know what has happened to Julian Assange”, Ms Walker said. “They all know why it has happened. And yet they have chosen, over the course of the last ten years, to run a concerted campaign, of lies, smears and fabrications", Ms Walker explained, adding that, "the greatest fabrication being Luke Harding's story that Trump's campaign manager [Paul Manafort] had been to see him at the Ecuadorian embassy. An embassy that was so fully surveilled and spied on that not a termite could visit that embassy without being recorded and filmed".

"We're today outside The Guardian offices, not only to celebrate Chelsea Manning's birthday, but to demand that the Guardian retract their lying article about [Paul] Manafort visiting Julian at the Ecuadorian embassy" and "tell the truth about Julian Assange" Joe Brack (@EfPress) pic.twitter.com/CbKAVGeicP

​Emmy Butlin, of the JADC, told Sputnik that the allegations of a visit by Mr Manafort to the Ecuadorian embassy, which has largely been debunked, “created a lot of damage” to Mr Assange. The story by Mr Harding, which remains on the website without any correction, was used by the US Department of Justice and others to “try and implicate” WikiLeaks and Mr Assange in an alleged conspiracy with Donald Trump and the Russian state.

The Guardian has been "instrumental in the persecution of Julian Assange here in the UK", including by publishing a "false story" by Luke Harding about Trump's campaigner manager Paul Manafort visiting Mr Assange in the Ecuadorian embassy, says @greekemmy. pic.twitter.com/vN2g9X2cLW

​Two Guardian journalists, David Leigh and Luke Harding, published a book about WikiLeaks which revealed the password that allowed the full unredacted diplomatic cables, that were heavily encrypted but available online, to be accessed and then published without redactions by the website Cryptome and then linked to by Pirate Bay.

Audio Recordings Confirm Assange Spoke to US State Dept to Stop Publication of Unredacted Cables
WikiLeaks ultimately published the unredacted cables on its own website after they had already been made available, and the charges against Mr Assange include his role in doing so. Neither Cryptome nor any other publisher has faced charged for publishing any of the same documents.

Mike Jackson, who was among the protesters, said that he supported the picket because Mr Assange "exposed to the world the disgraceful actions that the UK and US governments and defence forces were up to in the Afghan war and the war with Iraq". Mr Jackson said that The Guardian has played "an appalling role" in recent years in colluding with the UK and US governments in demonising Julian Assange".

The Guardian has played an "appalling role" in the demonisation of Julian Assange, says activist Mike Jackson outside of the newspaper's headquarters. pic.twitter.com/9aovL4s3pu

​As the picket came near to a close, a few of the protesters held up a banner with the words "Free Julian Assange" across the canal facing the rear of The Guardian headquarters. 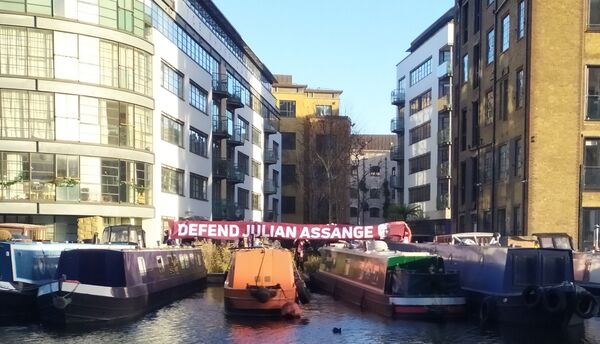 Ms Walker also warned against the rising tide of internet censorship and what she believed to be the role of intense state propaganda in facilitating recent illegal wars, as well as potential future conflicts. In particular Ms Walker noted that the US and UK governments increasingly appear to be targeting countries like Russia, China and Iran.

Mr Assange faces up to 175 years in prison if he is convicted if all 18 charges levied against him. The indictment against the award-winning publisher and journalist focuses on his role in publishing classified US documents which revealed war crimes and other criminality perpetrated by US forces in Iraq, Afghanistan and Guantanamo Bay, Cuba.