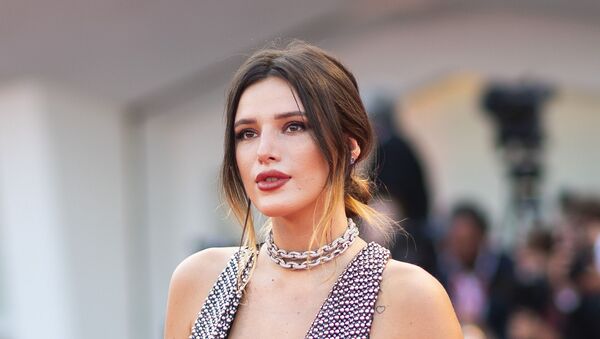 Aleksandra Serebriakova
Moscow-based Sputnik correspondent specializing in foreign affairs.
All materialsWrite to the author
Social media charmer Bella Thorne made a jaw-dropping move this summer by joining the OnlyFans platform, which charges subscribers for content and usually caters to sex industry workers and their clientele. In just 24 hours of creating her page, the former Disney actress earned a staggering, record-breaking one million dollars.

Bella Thorne’s OnlyFans blitz became a source of new controversy over the weekend, after the actress and singer told her 24.3 million Instagram followers that she was the “first” one to join the x-rated platform, with many now following her suit.

“Everyone jumping on OnlyFans but I took the hit for doing it firsttttt coooool,” Thorne wrote over a “double-masked” pic.

“Legit everyone In my news feed following in my footsteps,” she typed over another photo. “But when I was getting heat y’all were scared.”

The screenshots of the controversial revelation were soon reposted to other platforms, including Twitter, and have now been making rounds on social media, with users slamming Thorne for taking credit for OnlyFans’ popularisation.

After all, the service was launched four years ago and now has over 24 million registered content creators from different genres. It is mainly popular among sex workers but not limited to that. Even among celebrity influencers, Bella Thorne was not the first one to set her foot into the paid-content grounds of OnlyFans – reality star Black Chyna, Real Housewives' Dorinda Medley and Tana Mongeau did so long before her.

not bella thorne acting like she discovered onlyfans pic.twitter.com/Zaec1MegUf

Bella Thorne: I’m the first celebrity to make an onlyfans

This is only the latest controversy related to Thorne’s difficult relationship with the service. When she joined the site back in August, the former teenage actor broke a record by making $1 million dollars just a day after her appearance on Onlyfans, and briefly crashed the site.

But she was soon accused of scam after offering $200-nudes for purchase, while sending pics in response that featured nothing of the kind, according to complaints from users.

Many also whined at that time that the star’s actions had actually jeopardised the work of devoted sex workers on the platform, as OnlyFans was forced to set a 100-dollar cap on fan tips and a $50 charge on pay-per-view posts following her stint.

Thorne later apologised for her actions, saying that she was actually trying to help others by removing the stigma associated with sex work.

“In this process I hurt you and for that I’m truly sorry,” she wrote back in August.

However, her recent statement provoked a new round of hatred with users quickly recalling all of the Thorne’s previous missteps associated with OnlyFans saga.

Remember when Bella Thorne went onto OnlyFans, scammed people with PPV content, and in response the company installed new rules and regulations that damaged the income of all the non-millionaire users?

This is her now, feel mad yet? pic.twitter.com/npxLpYy9fJ

Bella Thorne out here acting like she was the first person to have an onlyfans 😭😂😭 someone get this girl a seat.... pic.twitter.com/0oO7BlXVol

while we're on this topic, let's talk about why celebrities like bella thorne are allowed to promote their onlyfans on instagram and make sexually promiscuous posts, but sex workers who do the same thing get their accounts suspended or posts taken down? pic.twitter.com/0WBv6jIzqe