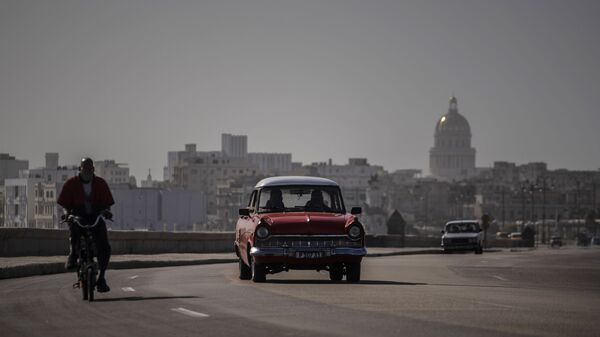 © AP Photo / Ramon Espinosa
Subscribe
International
India
Africa
Gaby Arancibia
All materialsWrite to the author
In late 2016, reports emerged that staff members at US and Canadian embassies in Havana, Cuba, were experiencing symptoms that included hearing loss, dizziness and a sensation or vibration of pressure in the head. The mysterious health effects resulted in the US accusing Cuba of carrying out attacks on its diplomats, resulting in new hostilities.

Cuban officials issued a statement on Tuesday rejecting claims made in a US report that alleged directed radio frequency energy was likely to blame for mysterious health ailments suffered by several diplomats working in Havana, Cuba.

Luis Velázquez, the president of the Cuban Academy of Sciences, noted in the release that the organization disagrees with the National Academies of Sciences (NAS) December 6 report, even though it "made progress in defining the medical characterization of the causes and issued valid recommendations."

"The report does not provide scientific evidence that radio frequency waves of great intensity existed in the area where the diplomats were located," the statement read, before underscoring that the NAS conclusion was more of a hypothesis and "certainly not a proven fact."

The NAS report was commissioned by the US State Department, a fact which likely raised red flags for the Cuban organization.

Velázquez's statement further stressed that the Cuban body recommended both "journalists and governments to listen to science and refrain from endorsing conspiracy theories." He added that symptoms reported by the affected individuals "should be considered and treated as a health problem, not as a political issue."

NAS explained in its reporting that it had determined "directed, pulsed radio frequency energy" was the "most plausible mechanism", after examining symptoms experienced by diplomatic staff. It's worth noting that the study authors did indicate that a more thorough investigation would be needed.

Although health problems were first documented in late 2016, reports on the matter were not raised until 2017, after dozens of individuals reported symptoms. The unusual development was eventually dubbed the "Havana Syndrome."

Initial reports suggested that afflicted individuals began first hearing an odd noise for a period of time, often late at night in their homes or hotel rooms. In some cases, the sudden wave of headaches and dizzy spells would prompt an individual to become nauseous.

With no clear understanding of what was happening, the Trump administration subsequently declared that the health problems were the likely result of a coordinated attack against American diplomats.

By August 2017, tensions between the US and the island nation reached a new height as two Cuban diplomats were expelled from the US. Some 15 Cuban diplomats would be expelled in the months that followed. Non-essential staff at the US embassy in Havana were later removed, leaving only a skeleton crew to keep the site running.

The Cuban government has repeatedly rejected all allegations that it had any involvement in the incidences, going so far as to offer its cooperation on investigations. Trump administration officials have refused to collaborate.