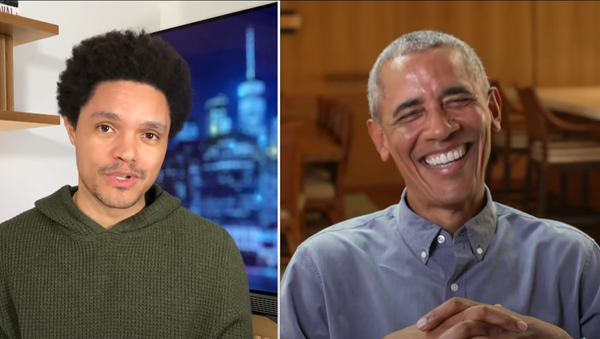 The Republican Party has found itself capable in recent years of winning the White House despite coming second in the popular vote - specifically in 2004 and 2016 when the GOP candidates won the election despite receiving fewer overall ballots cast for them than their Democrat challengers.

Barack Obama dubbed the Republicans “the minority party" in the US, during an interview with Trevor Noah on Tuesday.

The former president told The Daily Show host that the Republican Party does not on the surface appear to be outnumbered in support because of constitutional structures such as the Senate and the Electoral College giving it a disproportionate amount of influence.

“They have certain in-built advantages around power given their population distribution and how our government works,” Obama said.

“But the truth of the matter is that 60 percent of the people are occupying what I would consider a more reality-based universe, and those are the constituents we’re speaking to and that is a more diverse group,” he added.

Citing his new book, A Promised Land, the former president said he remembered the first time he went to a House Republican caucus, he observed a lack of diversity among the politicians involved.

“It is much more homogeneous, which means that, yes, they have to do less work,” he said. “But it also means that they can talk to themselves and as a consequence of the way our democracy, our republic, is structured they don’t have to appeal to as broad a base."

Obama claimed that although the arrangement was not "fair", he stressed that he would "prefer not having the progressives model ourselves... on the present Republican Party. That doesn’t feel like a good strategy to me to get the outcomes that we want."

The former Commander-in-Chief released his book last month, seeing the 768-page memoir sell more than 800,000 copies in its first day.

Obama's reference to the Republicans as a party of the "minority" despite having structural advantages appears based on election result discrepancies in recent history.

Since George W Bush's re-election in 2004, the Republican Party has been unable to secure the popular vote although it has still won the White House.

In 2016, Donald Trump defeated Democrat nominee Hillary Clinton. The GOP candidate only managed to get 46.1% of the vote to his opponents 48.2% but won through the Electoral College system, which allocates states a certain number of delegates, which then select the president.

Bush also won the 2000 presidential election with just 47.9% of the popular vote whereas his challenger - Al Gore - received 48.4%. This was because Florida - governed by Bush's younger brother, Jeb - controversially declared the state's 25 Electoral College delegates to the Republican candidate.