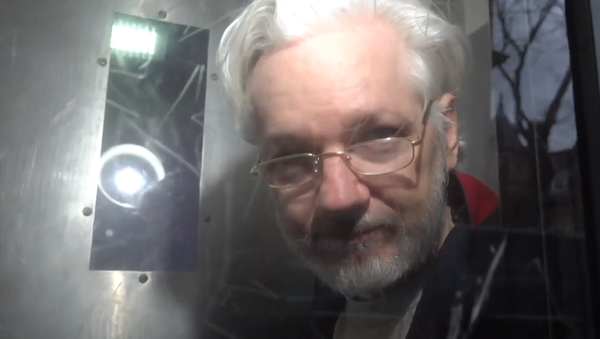 © Sputnik . Screenshot
Subscribe
Mohamed Elmaazi
All materialsWrite to the author
Julian Assange has been accused of endangering US interests and assets by "recklessly" publishing unredacted US State Department diplomatic cables. The charges are denied by both by WikiLeaks and the many journalists who note that Assange 'meticulously' redacted documents and sought to minimise possible harm while exposing illegal actions.

Audio recordings of a 2011 conversation between Julian Assange and Hillary Clinton's State Department, published by Project Veritas, provide new insight into the extent with which the WikiLeaks publisher sought to minimise harm from the potential release of unredacted US diplomatic cables, by actors working against the express wishes of the transparency organisation.

"So the situation is that, we have intelligence that the State Department database archive of 250,000 diplomatic cables, including the classified cables, is being spread around. [...]To the degree that we believe that within the next few days, it will become public and we're not sure what the timing could be, imminently or within the next few days to a week. And, there may be some possibility to stop it", Assange is heard explaining to Cliff Johnson, an attorney with the US State Department.

"Who would be releasing these cables?" Johnson asks, "Is this WikiLeaks?". "No," Assange explains, adding, "We would not be releasing them. This is Daniel Domscheit-Berg, a previous employee that we suspended last August".

The problem was that Domscheit-Berg was apparently sharing the link of the full unredacted diplomatic cables, which had been copied from the WikiLeaks website, and which could be found online. Ordinarily, the file with the full unredacted cables would have been useless as it was encrypted and would likely require years of highly-sophisticated computing to break the password through what is known in tech circles as the "brute force" method.

However, the password to the encrypted file was entrusted by Assange to Guardian journalist David Leigh, who, by his own account, kept pressing the Australian born-journalist for access to the entirety of the 250,000 documents. Leigh and fellow Guardian journalist Luke Harding would in February 2011 reveal the password to the world by publishing the key as the title of one of the chapters in their book WikiLeaks: Inside Julian Assange's War on Secrecy.

"[D]oes that mean that [Daniel Domschit-Berg] now [has] the ability..., without your control or authorisation, to make this as available as they want?" Johnson asks.

'Harm Minimisation': Assange Meticulously Redacted Docs Before Publication, Defence Witness Says
"In case there are any individuals who haven't been warned, they should be warned", Assange stresses.

Assange also explains the possibility of tracking down the encrypted files from the internet, potentially before people start using the encryption key revealed by Leigh and Harding. However, he explains that doing so is beyond the capability of WikiLeaks but that he was prepared to assist the State Department by urging other people to provide all the locations of the encrypted files.

"[W]e have been calling the State Department and the embassy for over a day, trying to explain the urgency, and they have not called back other than this call", Assange explains.

The first clip of the audio recording, lasting about four minutes, was published at 11:00 a.m., Eastern Standard Time, on 16 December, 2020, by James O'Keefe of the right-wing Project Veritas activist and media outlet. The recording, which lasts 75 minutes, covers the 26 August, 2011, telephone discussion between Assange and Johnson regarding the potential release of the unredacted cables and what might be done to prevent their disclosure or otherwise mitigate any harm.

The call from Johnson was a follow up conversation from the day before, when Assange and his then-partner, Sarah Harrison, sought to warn the US government that the nine months WikiLeaks spent working with journalists and a team with the US State Department to carefully redact the diplomatic cables for "harm minimisation" purposes might all end to no purpose.

August 2011 #JulianAssange contacted US State Dept to warn them all the US dip cables would be released, unredacted, by other outlets. Proof positive that neither #Assange nor WikiLeaks recklessly put people's lives at risk by dumping unredaced documents, his defence team says. pic.twitter.com/zIjr7wtybO

Fourteen minutes into the recording Assange explains to Johnson that WikiLeaks had attempted to stop the German news outlet Der Freitag from revealing the password to the unredacted cables that had been published by Harding and Leigh in their book. But German lawyers explained to WikiLeaks that only the US State Department would have the legal standing to seek to prevent publication of the unredacted cables or prevent the existing of the password from being revealed to a wider audience as the cables technically belonged to them, and not WikiLeaks.

​However, the US State Department ultimately did not intervene via the courts.

Hillary Clinton's State Department did nothing to stop it when they still could.

WikiLeaks had spent 9 months developing a careful plan to protect people at risk. The concern is clear in this audio. He was more concerned than Clinton's State Dept was.

The State Department also failed to follow up an offer for someone to be sent from the US embassy to meet Assange, who was under house arrest at the time, to assist them further.

The recordings further substantiate testimony heard at Westminster Magistrate's Court and the Old Bailey during Assange's extradition hearing. Specifically that Assange and WikiLeaks went out of their way to prevent the full release of the unredacted cables and then to assist in mitigating any potential harm. Ultimately the website Cryptome was the first to publish the documents in their raw form, without the redactions that WikiLeaks made over the previous nine months while working in 'the Bunker' with journalists from a variety of news outlets.

Cryptome has never been charged over its publication of the documents.

Cryptome (based in the US) and Pirate Bay ultimately published, or in the latter's case linked to, the full unredacted cables.

Professor Grothoff confirms that he accessed the docs this weekend & notes a WS from Cryptome they've never been prosecuted by the USG.

WikiLeaks ultimately published the full unredacted diplomatic cables after they had already been published by Cyrptome, a very popular site among journalists and loosely linked to Pirate Bay.​

It is noteworthy that Professor Trevor Timm, co-founder and director of the Freedom of the Press Foundation, testified at the Old Bailey in September that even if WikiLeaks had published the unredacted documents, potentially exposing the names of US government assets first, "no court has ever said that the publication of names in this matter would be illegal".

It is understood that incumbent US President Donald Trump is currently a fan of O'Keefe, and some believe that he may be swayed to grant Assange a pardon, as he is being encouraged to do so by activists, journalists and politicians.

Assange is awaiting the decision of Judge Vanessa Baraitser as to whether he should be extradited to the United States to face 18 espionage related charges to his role in publishing the Iraq War logs, the Afghanistan Diaries, the Diplomatic Cables and the Guantanamo Bay detainee files. He faces a maximum of 175 years in prison.