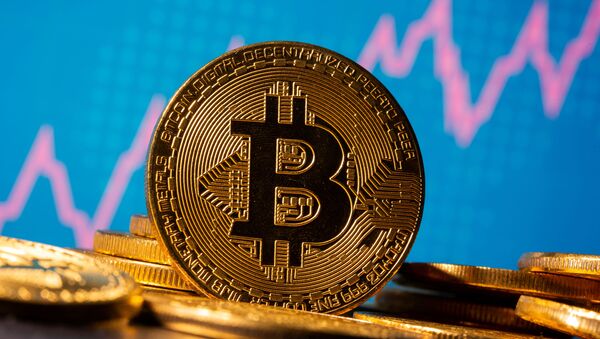 James Baillie
All materialsWrite to the author
Bitcoin, the original and most widely used cryptocurrency, has surged this year amid increased levels of institutional interest despite a severe crash in March that saw it lose 25 percent of its value amid the coronavirus pandemic.

Bitcoin has passed $20,000 for the first time, marking a key milestone for the digital asset, which has almost tripled in value this year, gaining 170 percent.

This has led some traders to speculate that Bitcoin's growth will be exponential, and possibly worth as much as $35,000 in early 2021.

If this trend continues the second half of December could see $24k #Bitcoin with a retracement to $21k and then $35k in Q1. Get ready for a hell of a ride!🚀 pic.twitter.com/4s8bP7Q2yc

​But a look back at the history of the cryptocurrency shows that Bitcoin has always been an extremely volatile investment and not one for the faint-hearted.

Here is a look at some of the currency's main ups and downs:

Back then, there were few exchanges where digital currencies could be bought and sold so Bitcoin trading was pretty illiquid - leading to sharp peaks and troughs. The price rose from under $1 to around $32 in mid-June 2011. But by November 2011 it had tumbled back down to just $2. Looking at the price of the currency now, it is strange to think that those investors who sold at $32 probably thought they were getting out at the right time.

The second crash happened just months later. The price moved up from $4.5 to more than $7 in January but then fell sharply to just $3.8 by the end of the month without anything to explain the sudden rise and fall.

Bitcoin steadily gained ground over the next two years - despite muted trading interest - and began 2013 at around $13. Early 2013 was bullish for the cryptocurrency, as it pushed past its all-time high of $32, reaching $49 before a one-day minor correction back to $33.

This time round it managed to recover quickly because of a significantly higher number of exchanges and traders, combined with extensive media coverage. By April 2013 it had reached $260, but an outage at the then most popular exchange, Mt Gox, prompted a dramatic slide down to $40.

Again the currency recovered with new investors taking the leap into crypto. In late 2013, the price was nearing $1,200 before gradually sliding back to a low of $150 in January 2015.

This was the year that the cryptocurrency really took off, pushing past the $10,000 mark and rocketing all the way to $20,000 before running out of steam.

A slew of new cryptocurrency launches and concerns about Bitcoin's sustainability then saw another sell-off down to a low of $5,900.

The past three years have seen Bitcoin claw its way back to $20,000, this time fuelled by interest from mainstream investors.

Even a 25 percent fall in March because of the coronavirus pandemic did little to halt its rise.

Wall Street firms have also taken a greater interest in Bitcoin in recent weeks, seeking to capitalise on its gains in a world of rock-bottom interest rates and subdued stock markets.

Guggenheim Partners, for instance, recently said it might invest up to 10 percent of its $5.3 billion Macro Opportunities Fund in a Bitcoin trust.

But the big question for investors is how long the current rally will continue.

“People tend to pile into momentum trades, so Bitcoin could have more upside from here,” said Ed Campbell, portfolio manager and managing director at QMA.

#Bitcoin has reached a new all-time-high, having busted through 20k. pic.twitter.com/ZrfPcnYzXj

But others warned that Bitcoin was not being used for its initial purpose - to change the global financial system.

All you're doing is destroying the utility of the tool via greed.

Do you want to change the financial system with Bitcoin or cryptocurrency in general?