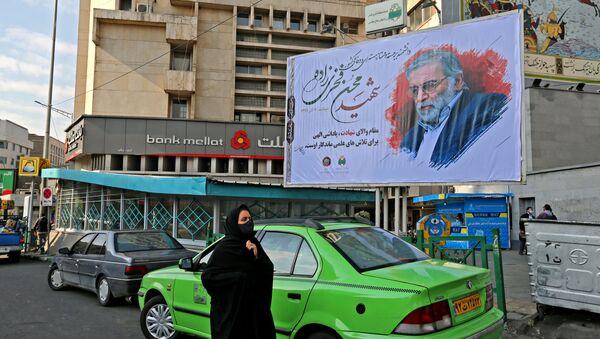 Ilya Tsukanov
All materialsWrite to the author
Iranian physicist and rocket scientist Mohsen Fakhrizadeh was killed in an attack on his vehicle on 27 November about 175km outside Tehran. Iran immediately blamed Israel for the killing and threatened revenge. The Israeli government has made no official comment on the matter, but has reportedly also braced itself for possible retaliation.

US special representative for Iran and Venezuela Elliott Abrams has praised the targeted assassination of Iranian officials, and suggested that Mohsen Fakhrizadeh’s killing has set back Iran’s alleged nuclear weapons programme.

“I think it’s a mistake to believe that Iranian officials… are interchangeable cogs in a machine who have no personal aspects that are irreplaceable,” Abrams told the Times of Israel.

“No one knew more” about Iran’s alleged plot to build a nuclear bomb than Fakhrizadeh, Abrams said, suggesting the scientist was “the main organiser of this programme, and the main intermediary between the nuclear weapons programme and the top leadership of the country.”

“So I do think that his departure from that position will slow them down,” Abrams added, referring to the murder.

Abrams also hinted at Tel Aviv’s responsibility for the scientist’s killing, saying “Israel has the right to defend itself,” but he didn't elaborate further.

Defending the practice of targeted killings more broadly, Abrams recalled the successful January 2020 assassination of General Qasem Soleimani in Baghdad by the US, claiming that the Iranian general had organised attacks against US forces in the Middle East and planned to carry out more.

Abrams also praised Israeli Prime Minister Benjamin Netanyahu for his opposition to the 2015 Joint Comprehensive Plan of Action (JCPOA) Iran nuclear deal, calling him a visionary who proved to be “ahead of the curve”  on Iran and “exactly right in his criticism”.

The envoy also defended Netanyahu’s warning to Joe Biden about re-entering the JCCPOA. “I think it’s wrong, it’s unfair to say, ‘well the government of Israel should never express its views publicly’. That’s a position we don’t impose on other friendly governments,” he said.

Iran's President Accuses Israel of Assassinating Nuclear Scientist to Provoke War in Region
Abrams also revealed that he and other members of the Trump administration have met with Biden's national security officials to try to “persuade them” that the deal is out of date. The official put faith in the Trump administration’s many packages of sanctions against Iran, which he said should make it difficult for Biden to completely reverse the present course.

“It isn’t like flipping a light switch – yes, no sanctions. I think this will be a very complicated negotiation between the US and Iran and I do not think that all of the sanctions will be lifted,” Abrams said.

Abrams, a veteran Reagan and Bush-era foreign policy specialist best known for his involvement in the Iran-Contra scandal, was appointed by Trump to serve as US special representative for Venezuela in January 2019, soon after opposition leader Juan Guaido proclaimed himself the country’s ‘interim president’. Venezuelan officials described the move as an attempted coup, and have characterised Abrams himself a “specialist in regime change”. Abrams received additional, Iran-related duties in August 2020 after the departure of Brian Hook from the role of special representative for Iran.

Earlier this month, Abrams expressed confidence that Iran would be unlikely to seek immediate revenge for Fakhrizadeh’s murder, saying that doing so might “make sanctions relief harder to get” under the incoming Biden administration.

Before that, he said there was bipartisan unity in Congress for making “changes” and “modifications” to the JCPOA before Washington would even consider rejoining it under Biden. Iranian officials have repeatedly made clear that the nuclear deal is not up for renegotiation.

US Envoy Abrams Urges Incoming Biden Administration to Maintain Pressure on Venezuela
On Monday, Iranian President Hassan Rouhani again accused Israel of responsibility for the Fakhrizadeh killing, calling it a desperate attempt to destabilise the region and provoke war in the waning days of Trump’s “ill-fated” presidency. Rouhani indicated that Iran has so far refrained from reacting in a bid to maintain regional stability, but warned that Tehran reserves the right to retaliate to the assassination at a time and place of its choosing.