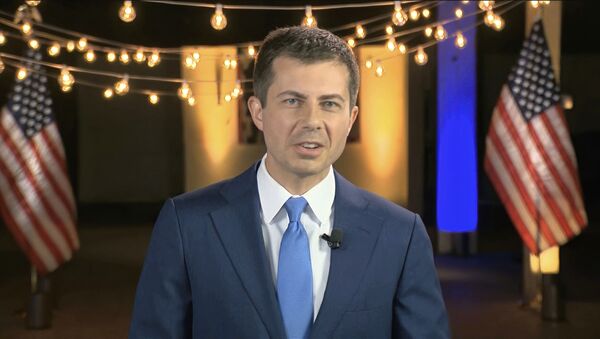 © AP Photo
Subscribe
International
India
Africa
Daria Bedenko
All materialsWrite to the author
Earlier on Tuesday, multiple reports emerged suggesting that US President-elect Joe Biden had picked a former Democratic rival, Pete Buttigieg, as his nomination to head the US Transportation Department.

Reports suggesting that Biden is expected to name Buttigieg as his choice to head the US Transportation Department emerged on Tuesday, but there has been no official confirmation of a nomination.

Anticipating the possibility of the first openly gay member of a presidential cabinet, netizens tweeted opinions on the potential appointment, with many appearing to be delighted about Buttigieg's landing shot.

Mayor Pete Buttigieg would be the first Senate-confirmed LGBTQ Cabinet secretary should his nomination make it through the chamber. This will be a historic milestone for LGBTQ visibility. https://t.co/S6buJ4Rl47

​For some, the fact that Buttigieg used public transportation during his presidential run turned out to be a factor that, they suggest, could make him a decent transportation secretary.

Our next Secretary of Transportation @PeteButtigieg. Using mass transit. During his Presidential run. Period. pic.twitter.com/me72QwIUKa

​Other recalled fun facts about Buttigieg's favourite board games that happen to involve transport.

Fun fact: One of @PeteButtigieg's favorite board games is Ticket to Ride, a game that involves collecting trains and claiming rail routes through states across the U.S.

​Some fantasized on his possible first initiatives as transportation secretary.

Pete Buttigieg’s first order of business as Secretary of Transportation should be to add Mike Pence to the no fly list.

​However, not everyone appeared enthusiastic about Buttigieg becoming the first openly gay presidential cabinet member or his love of transport-related board games, stating instead that the former South Bend mayor does not have credible experience in the field in which he would be expected to head.

Pete Buttigieg was such a bad mayor, he asked Domino’s Pizza to fix South Bend’s potholes.

Now, Joe Biden wants to put him in charge of the Department of Transportation.

"What's next, Ronald Mcdonald as head of the USDA?" 😂😂

live footage of the biden team picking pete buttigieg to be secretary of transportation pic.twitter.com/mYFLbNPXBB

​Some Netizens recalled reports that Biden was mulling Buttigieg for other high-profile positions, continuing to slam him for lack of qualification.

Buttigieg was floated for VA, ambassador to China and now Transportation. An expert in so many things!

How is it not a bigger deal that Pete Buttigieg keeps getting floated as a possible pick for incredibly important positions he has absolutely no experience in?

While Biden's incoming administration is being touted as the "most diverse" in American history, nothing can ever satisfy the requests of absolutely everyone.