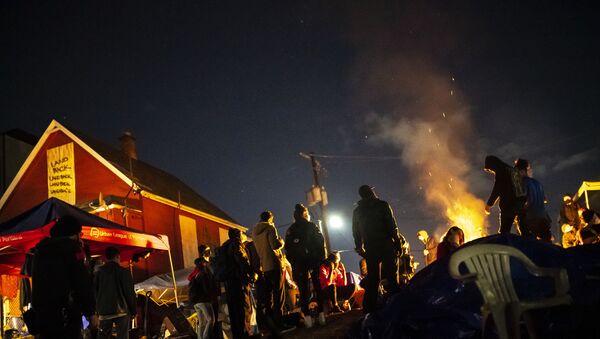 James Baillie
All materialsWrite to the author
The so-called “autonomous zone” was established on Tuesday although protests have been held at the site for the past three months, as demonstrators have been protesting urban gentrification by barricading streets with metal, wood and wire fencing and setting booby traps for police.

A booby-trapped “autonomous zone” in Oregon has been dismantled, after Portland Mayor Ted Wheeler struck a deal with protesters at the site.

The deal will allow the Kinneys, a black family whose eviction initially led to the protests, to remain where they are.

Wheeler’s office confirmed that a deal had been struck, although it was not clear if the house was being sold back to the Kinneys, the family that was evicted after defaulting on a mortgage.

Protesters tweeted their jubilation at the news.

Our work is not going unseen! The mayor has promised the Kinney family that they will not raid Red House as long as the barricades are taken down by Monday night. pic.twitter.com/12FmRdT0Bz

Wheeler also wrote to the Kinney family to apologize for an earlier tweet in which he authorized police to use all lawful means to end what he describes as an illegal occupation, according to the Oregonian.

I am authorizing the Portland Police to use all lawful means to end the illegal occupation on North Mississippi Avenue and to hold those violating our community’s laws accountable. There will be no autonomous zone in Portland.

“Nobody should be subjected to this kind of stress and harm, and we apologize for the role our tweets played in this,” added Wheeler.

Seriously, if this deal holds, the Red House saga would be the biggest win we've seen since the Fed Wars, and I'd argue this is a much more substantial and definitive victory for the revolution.

The results of this will ripple across the nation.

The current owner has offered to sell the house, in which the Kinney family has lived for the past six decades, back to the Kinneys for the $260,000 he paid for it in a foreclosure sale, plus the $20,000 he says it has cost him since then, according to Oregon Live.